Israel Houghton is a singer-songwriter, producer. Israel is married to his wife Adrienne Houghton and has four children.

Israel Houghton and Adrienne Houghton have been married for four years since 11th Nov 2016. They started dating each other in Feb 2016, and after having an affair for six months the couple tied the knot. 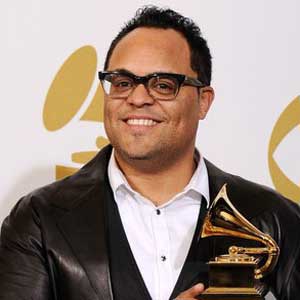 Strength is for service, not status.

Haters are like crickets. Crickets make a lot of noise, you hear it but you can’t see them, then right when you walk by them, they’re quiet.

Many times we say Jesus is first in our life, and i get that, but Jesus should not be first, He should be center of everything.

Who is Israel Houghton?

Houghton was born was on May 19, 1971, in Oceanside, California US. His ethnicity is ‎Mixed (American and African American) and his nationality is American.

The name of his father is unknown. His mother’s name is Margaret Houghton. But in an interview, he says, he has grown in a white family but his biological father was black. His stepfather’s name is Henry Houghton.

He also has his siblings including 3 younger half-siblings from the mother’s second marriage (two brothers and one sister) and 3 half-sisters from the biological father’s side.

The information regarding his childhood and education is unknown. Also, there is no information on which subject he graduated from.

Israel Houghton has released over 13 albums since 1997, 11 of which were released under his own music label Integrity but he came into the limelight after the release of his album “Bigger Than My Imagination” which was described as “one of the year’s best worship albums” in the 2003 Christianity Today review.

Israel Houghton after that involved in worship ministry from 1989. He has also formed his New Breed Ministries in 1995.

As he also starts his career as a music producer and he releases his first release on Sony.

He had then produced other various albums including Real in 2002 and Lives from Another Level in 2004. In 2005, His Alive in South Africa song featured performance in Cape Town.

The holiday album Timeless Christmas appeared a year later. And after there Love God, Love People releases. In 2012, he has come up with the album Integrity which had 26 tracks.

Houghton with his group started to continue their travels with Covered Alive In Asia, released in 2015.

As Israel has different outstanding works, he receives different awards.
He received Grammy Award for Best Pop/Contemporary Gospel Album in the year 2011, 2010 for Love God, Love People, The Power of One. Likewise, he again received Grammy Award for Best Contemporary Christian Music Song in 2013 for the song Your Presence Is Heaven [Studio Version].
Moreover, in 2015, he receives the GMA Dove Award for Traditional Gospel Recorded Song of the Year for his song, How Awesome Is Our God.

Israel songs are much popular and he receives different awards for his various albums. So he must have good earning. His net worth is $8 million.

Israel is having a peaceful professional and private life for which he doesn’t appear in any of the rumors. Once many rumors were developing about Adrienne Bailon and his relationship where he clearly mentions that they were dating.

Israel Houghton has a large built body standing with a height of 5 foot 6 inches and weighs 80 kg (176 pounds). He has black colored hair and dark brown colored eyes.