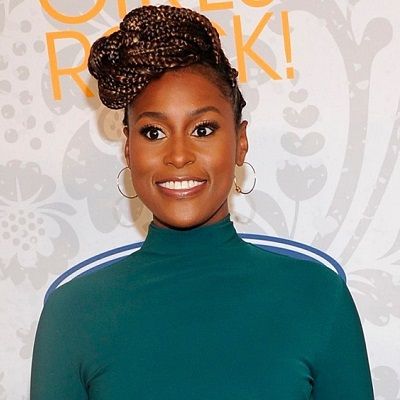 What is the relationship of Issa Rae?

Issa Rae is engaged to her long-term boyfriend, Louis Diame. Louis is a Senegalese businessman. They have been rumored to be dating for two decades.

In April 2019, Rae is spotted with her diamond ring on the cover of Essence Magazine.

Who is Issa Rae?

Issa Rae is an American actress, Producer, and Writer. Rae is renowned as Issa Dee of the TV series, Insecure.

Next, she will be appearing as Mae in the movie, The Photographs.

She is also an additional voice for Google Assistant.

Issa Rae was born Jo-Issa Rae Diop on the 12th of January 1985 in Los Angeles, California. Her father, Dr. Abdoulaye Diop is a neonatologist and pediatrician by profession. Her mother, Delyna Diop-Hayward is a teacher.

She spent her childhood with four siblings in Potomac, Maryland. While growing up, she experienced many things like swimming and dining with her Jewish best friends.

later, she was in sixth grade, her family shifted to the View Park-Windsor Hills neighborhood of Los Angeles. In the neighborhood, she attended middle-high school.

She graduated from King Drew Magnet High School of Medicine and Science. In school, she started acting. In 2007, she completed her Bachelor’s degree from Stanford University with Honors in African and African-American Studies.

During her college days, she used to write and director for music videos and plays.

– She started her career in the Theater. After college, she was associated with The Public Theater in New York as a fellow member. She also started taking a class in New York Flim Acamedy. She also did some odd jobs.

– In 2011, she debuted on TV with the series, The Misadventures of Awkward Black Girl as J. The series was premiered on YouTube. Eventually, the series went viral. To complete the series, they also raised the fund through donations and her YouTube channel.

– After the hit debut series, she acted in many TV series like The Number, Orange Is the New Black and Sexy, and Little Horribles.

– In 2012, as a producer, she debuted with the series, M.O. Diaries. After that, she was associated with The Misadventures of Awkward Black Girl as a producer for a single episode only.

– Later, she wrote for the Series, The Choir for 24 episodes. She also directed a few of the episodes.

– In 2016, she was cast in the TV series, Insecure. The series turned out to be one of the milestones of her career. In 2017, The American Flim Institute named it as top ten American TV series. For the series, she was also nominated for the Two Golden Glode Awards. She was also an executive producer for the series.

– In 2019, she also contributed the voice for the character of Mom in the animated film, Hair Love.

She is a black-eyed brunette. Her height is 5 feet and 9 inches.

She also has a YouTube channel, Issa Rae Presents with 461k subscribers with 49 million views.