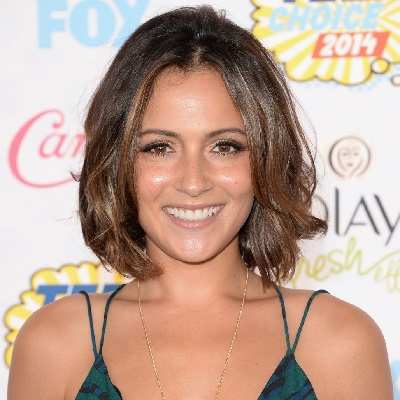 I think I feel most sexy when I have a matching lingerie set underneath what I'm wearing. I know what's going on and no one else does. There are so many amazing directors I would love to work with, like Christopher Nolan, who is a total pipe dream. At first, when we got engaged, I asked him if we could just go to Vegas and get married by Elvis, just because I didn't want to deal with planning a wedding

The couple started dating each other in July 2008. After dating for the four years, they took their relationship to the next stage and got engaged on 19th August 2014.

Two years after that, they tied the wedding knot on 15th October 2016. The wedding took place in Los Angeles where she wore a strapless and beaded wedding ball gown whereas the groom wore a Samuelsohn tux.

In 2019, they welcome their first child, Robert Amell V.

Who is Italia Ricci?

Canadian-American Italia Ricci is a 2X Teen Choice Award-winning actress. She is renowned as Emily Rhodes of Designated Survivor, April Carver of Chasing Life, and Gina of Don Jon.

Last, in 2020, she appeared in the TV Movie, Love in Winterland as Ally.

Italia Ricci was born on 29th October 1986 in Richmond Hill, Ontario, Canada to Terry Ricci. Her birth name is Stephanie Italia Ricci. She is of Italian ethnicity.

She has two brothers; Mike and Vince Ricci. Moving toward her academics, she is an alumna of Queen’s University.

At the age of 21, Italia Ricci started her career as an actress with the movie, American Pie: Beta House. In the spin-off American Pie franchise, she portrayed the character of Laura Johnson. Her very first movie gave a good kick in her acting career.

Following that, she appeared in the movie, The Death of Indie Rock as Diane. The next year, she entered the TV industry with the series, Aaron Stone as Chase Ravenwood.

Following that, she appeared in series like How I Met Your Mother, House M.D, Greek, and Secret Girlfriend. Through those series, she left a significant impact on the entertainment industry.

In 2014, she made her appearance in the series, Chasing Life as April Carver. Subsequently, she featured in the political thriller, Designated Survivor. On 7th June 2019, the series’ third season was premiered on Netflix.

However, the series was canceled in July 2019. In the series, she appeared as the spokesperson of Kirkman’s presidential campaign, Emily Rhodes.

Talking about net worth, she is not only the millionaire in the family. Her husband, Robbie Amell has an estimated net worth of $2 million. His net worth is attributed to his career as an actor and producer.

Italia Ricci has brown eyes with brunette hair. She stands at a height of 5 feet 6 inches and weighs around 55 kg. Her body measurements are 34-24-35 inches.