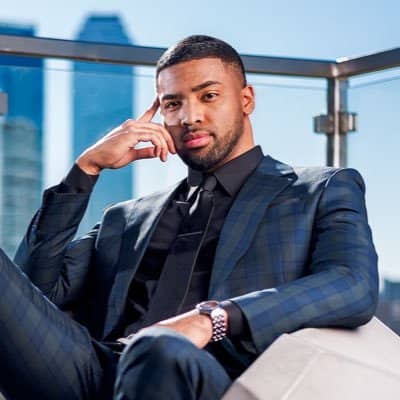 What is the relationship of Ivan Hall?

There is no information regarding his present love life. He is tight-lipped when it comes to talking about his personal details. He is possibly single for now.

Likewise, he keeps on posting photos with his buddies. Currently, he is serious about his career and working hard on it.

However, in the past, he had dated Tayshia Adams and Heather Martin who both are the stars of the reality show.

Who is Ivan Hall?

Ivan Hall is an American aeronautical engineer by profession and reality star. He is popular for his appearance on the reality show ‘The Bachelorette’ and ‘Bachelor in Paradise’.

What are the birth facts of Ivan Hall?

His parent’s name is not available at the moment as he hardly speaks about them in public. However, he often posts his parent’s pictures on his social media.

He grew up in Dallas, Texas. Ivan also has a brother named Gabriel who was recently charged with the first-degree felony murder of a 33-year-old man Carlos Veliz Jr.

Ivan once spoke about his brother on the show to Adams that he took care of Gabriel’s young daughter while his brother’s ongoing legal issues. Ivan’s parents are very supportive of him and his brother is also close to him.

He holds an American nationality. He has an ethnic background of half black and half Asian. Ivan is a well-educated man as he is a current aeronautical engineer.

Ivan Hall works as a professional senior software quality engineer for Lockheed Martin. He also worked for a Northrup Grumman as a systems engineer.

Likewise, he has endorsed many companies and brands. Similarly, he is popular on his Instagram account with over 163k followers. He often posts his lifestyle on Instagram.

However, he was unable to win the show and was eliminated in the 11th week.

Ivan has never had any noticeable awards till now.

Speaking on his income, he makes a decent sum of money through his successful career as an engineer and his appearance on reality shows. He has an estimated net worth of around $300K.

His earnings are influenced by his appearance in reality shows.

Even though there have always been romance rumors surrounding the stars of reality shows. It’s normal for him to be one of them but he has never fallen for any rumors that have hampered his professional or personal life.

How tall is Ivan Hall?

Hall has a decent height of 6 feet 1 inches and weighs moderate. similarly, his eyes are of black color, and his hair is shortly trimmed black too.