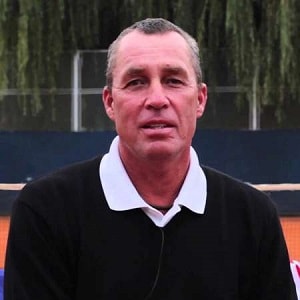 “Once you win, you have no doubt that you can win. So you have gone through it once, and you can do it again.”

Ivan Lendl has been married to his beloved wife Samantha Frankel. The couple tied the knot on September 16, 1989. They are currently living in Goshen, Connecticut. They have welcomed five daughters and they are named as Isabelle, Daniela, Caroline, Marika, and Nikola. Nikola enjoys horsing events, Caroline is interested in rowing, while his other daughters are interested in golf.

Who is Ivan Lendl?

Ivan Lendl is a retired Czech-American professional tennis player and he is considered as one of the greatest in the sport’s history. He became world No. 1 for 270 weeks in the 1980s and ended his career with 94 singles titles. He is considered as one of the most influential tennis players in his current time and after his retirement, he coached multiple players including Andy Murray, who won three major titles and reach the No. 1 ranking.

His mother once became the no.2 best players in the country. He learned to play tennis since his childhood and he was grown up in his own birthplace. He holds dual nationality of American and Czech Republican. His ethnicity is Caucasian.

He is graduated from the University of Alabama. There is no detail information available about his school life.

He played as a professional tennis player from 1978. He reached his first top-level singles final in 1979 and won seven singles titles in 1980. Ivan was a member of Czechoslovakia’s Davis Cup winner that year. He was the part of the team that won the World Team Cup in 1981 and became runner-up in 1984 and 1985.

Ivan made his way to the US in 1986 because his country’s Tennis Association viewed him as an ‘illegal defector’. He won ten titles in 1981 including his first-season ending Masters Grand Prix tour title. Ivan won seven tournaments in 1983 and reached his first Grand Slam final at the French Open in 1981 and lost in five sets to Björn Borg.

He was also defeated in the final of the Grand Slam final and he finally won his first Grand Slam title at 1984 French Open. He lost French Open final with Mats Wilander in 1985.

Roger Federer recorded with him as the only male player with over 90% match wins in five different years in 2006 and he won his first Australian Open title in 1989 and became the winner of Queens’s Club Championships in 1990.

He retired from his professional due to chronic back pain at the age of 34, on December 21, 1994, but he participated in other matches like the Caesars Tennis Classic exhibition match in Atlantic City. He played in the match against McEnroe at Madison Square Garden in New York City and also played in 2012 Sparta Prague open tournament.

He organized the charity competition ‘Ivan Lendl Celebrity Golf Tournament’ in 2004 and played several times in the ‘Gary Player Invitation charity Pro-Am’ and the fund was used for the education of the unprivileged around the world.

It is estimated that he has a net worth of around $40 million and his main source of earning is from his professional career. His salary and income are under review,

He has a height of 6 ft. 2 inches and he weighs 79 kg. He has black and white hair and black eyes.