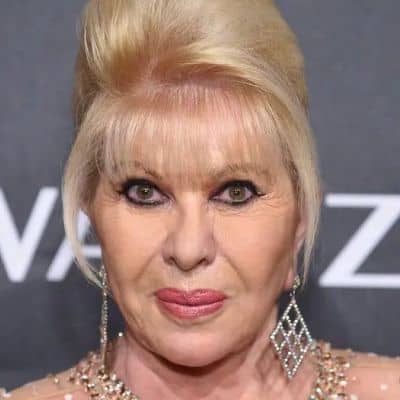 They exchanged marital vows on April 7, 1977, at the Marble Collegiate Church in Manhattan in a ceremony performed by the Reverend Norman Vincent Peale.

Count Roffredo:- They dated from 1997 to 2005. The reason behind the end of their relationship was Roffredo’s death.

Who was Ivana Trump?

Ivana Trump was a businesswoman, fashion designer, author, model, and media personality. She was the first wife of Donald Trump, former president from 2017 to 2021.

On 14th July 2022, she passed away at the age of 73, in her home which is ni New York City. The reason behind her death is suspected to be cardiac arrest, but the official cause of her death has not been determined yet.

The former president’s wife was born on February 20, 1949, in Gottwaldov, Moravia, Czechoslavakia. She had a Czech-American nationality, while she was of mixed ethnicity. Similarly, Ivana Marie Trump is her full name.

She was born to her father, Miloš Zelníček, an electrical engineer, and mother, Marie Zelníčková.

Moving on in her educational life, She went to Charles University based in Prague. From there she graduated with a master’s degree in physical education in 1972.

After getting married to Donald, she worked as a senior executive for seven years in The Trump organization. Later, she was assigned as CEO and president of the Trump Castle Hotel and Casino which is in Atlantic City.

Then, she divorced Donald in 1992 after she found out about his affair with Marla Maples.

After the divorce, she founded the lines of clothing, fashion jewelry, and beauty products. Then, she had her business interests in Croatia. It covered the purchase of 33% of the nation’s second-largest daily newspaper.

In 2017, she released a self-biopic, Raising Trump, which consists of her story from upbringing to raising her children with Donald.

As a media personality

In April 1988, she had tv appearances with Donald on various TV programs like, ‘The Oprah Winfrey Show‘, and ‘Wogan‘.

Then as an actress, Ivana Trump made a cameo appearance in the Hollywood movie, ‘The First Wives Club‘ in 1996. She even hosted the reality tv show, ‘Ivana Young Man’ in 2006.

Recently on July 14, 2022, Ivan Trump passed away at the age of 73 at her house in New York City. She was found unresponsive and unconscious at the bottom of a staircase.

Her former husband, Donald Trump even showed sympathy by posting,

“I am very saddened to inform all of those that loved her, of which there are many, that Ivana Trump has passed away at her home in New York City. She was a wonderful, beautiful, and amazing woman, who led a great and inspirational life. Her pride and joy were her three children, Donald Jr., Ivanka, and Eric. She was so proud of them, as we were all so proud of her. Rest in peace, Ivana!”[79]

Many politicians and celebrities are seen posting condolences on social media. Some of them include Rudy Giuliani, former New York City, Kayleigh McEnany, Paris Dennard, and others.

The reason behind her death is suspected to be cardiac arrest, but the official cause of her death has not been determined yet.

Late, Ivana Trump had a net worth of around $100 million. While she was alive, she was living a luxurious life.

Donald Trump’s first wife had always been part of the limelight while she was alive.

Currently, the news of her death is taking over the headline

Ivana Trump’s body measurements and height and weight are not available at the moment.

Though, she had a fair complexion with a pair of brown eyes and ash-blonde hair.