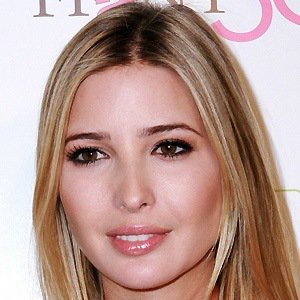 I make money because I have to pay for everything apart from my [Choate] school fees. My mother even makes me pay my own telephone bill

Love what you do. There's always going to be someone else who's smarter than you, but there's no substitute for passion. People who are passionate always work the hardest, and that sets them apart!

What is the relationship of Ivanka Trump?

Ivanka Trump’s personal life is as successful as her professional career. She is a married woman since 2009. She is married to her longtime boyfriend, Jared Kushner, Senior Advisor to President Trump.

The couple began dating each other back in 2005. The couple broke up in 2008 due to the objections of Kushner’s parents but they got back together and married in a Jewish ceremony on October 25, 2009.

They together have three children: daughter Arabella Rose Kushner and sons Joseph Frederick Kushner and Theodore James Kushner. They have been together for over a decade now and their relationship is still going fine.

Ivanka is the step-daughter of Melania Trump.

Donald Trump jr.’s mother Ivana Trump died at the age of 73. She is the mother of three of his children: Ivanka Trump, Donald Trump Jr., and Eric Trump.

The reason for her death is unsure but it is probably due to an accident as she was found unconscious near a staircase at her New York City home.

Who is Ivanka Trump?

She has also established herself as a successful author and fashion model. She is the daughter of U.S. President Donald Trump. Ivanka is the Executive Vice President of her father’s company – The Trump Organization.

Marie Trump was born on October 30, 1981, in Manhattan, New York City, United States. She is the daughter of the current President of the United States Donald John Trump and former Czech-American model Ivana Marie.

Ivanka is an American by nationality and of German, Scottish, and Czech ethnicity. Her parents divorced in 1991 when she was ten years old. She has two brothers, Donald Jr. and Eric; a half-sister, Tiffany; and a half-brother, Barron.

She attended the Chapin School in Manhattan until she was 15. Shortly, she transferred to Choate Rosemary Hall in Wallingford, Connecticut. After graduating from Choate, she attended Georgetown University for two years.

After that, she transferred to the Wharton Business School at the University of Pennsylvania and graduated with a bachelor’s degree in economics in 2004. She hosted the Miss Teen USA Pageant in 1997.

Ivanka Trump’s Career, and Net worth

Trump began her career as a model in the mid-1970s. Her first cover was a 1997 issue of Seventeen. Since then, she has walked fashion runways for Versace, Marc Bouwer, and Thierry Mugler.

She has done advertisement campaigns for Tommy Hilfiger and Sassoon Jeans and was featured on the cover of Stuff in 2006 and 2007.

She has been featured on the covers of Forbes, Golf Magazine, Avenue, Elle Mexico, and Top Choice Magazine. She was placed number 83 on the 2007 Maxim Hot 100.

Ivanka made her TV debut on her father’s television program The Apprentice 5, in 2006. Her first book, The Trump Card: Playing to Win in Work and Life, was published in October 2009.

Ivanka began her business career working for Forest City Enterprises in 2004. She joined her family business in 2005.

She is currently Executive Vice President of Development & Acquisitions at the Trump Organization. She has her own line of fashion items, including clothes, handbags, shoes, and accessories.

Ivanka has been a very successful person in her career and she has accumulated a net worth of 300 million dollars.

There is no rumor of her current love affairs. Rumors are that Ivanka Trump’s fashion brand has been dropped from stores with a furious response from her father, President Donald Trump.

Her clothing and jewelry line is now more difficult to find on many retailers and websites. She has a clothing factory in Indonesia where she ill-pays her staff. The working conditions are also poor at her factory site and she is said to be exploiting her workers.

Ivanka Trump stands 5 feet 11 inches tall and has a body weight of 64 kg.

Her hairs are blonde colored and her eyes are light brown in color but she is known to be using colored contact lenses.

The family feud-Ivanka Trump vs Donald Trump Jr on implementation of background check for all gun sales!