Reflecting on the personal life of Ivica Zubac, he is in a relationship with a Croatian model Kristina Prisc. Their affair was started from 2015 in Zagreb. This couple is still in love with each other. 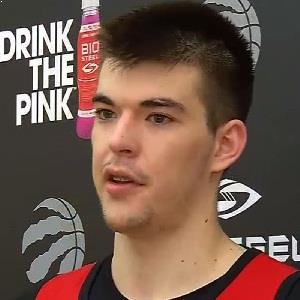 Who is Ivica Zubac?

Tall and handsome Ivica Zubac is a Croatian well-known professional basketball player. He is best known as the player for the Los Angeles Clippers of the National Basketball Association (NBA). He plays from the center position wearing jersey number 40.

Croatian professional basketball player Ivica Zubac was born in Mostar, Bosnia, and Herzegovina on 18 March 1997. He is of Croatian ethnicity and has Croatian nationality.

His mother’s name is Dijana Zubac and his father’s name is Ivan Zubac. His personal life isn’t in the limelight as his career path is. He has a brother named Antonio Zubac. Since childhood, he has built up a strong interest in basketball sports.

There isn’t any information about his early life and education.

In February 2016, he left Cibona to join Mega Leks of Serbia. He was selected by the Los Angeles Lakers in the 2016 NBA draft. On 7 July 2016, he signed a rookie contract with the Lakers and played for the team in the 2016 NBA Summer League.

On 2 November 2016, he made a debut in a winning match against Atlanta Hawks recording 6 points for the team. He recorded a career high of 25 points and 11 rebounds in a match against the Denver Nuggets. Furthermore, on February 7, 2019, Zubac was traded to the Los Angeles Clippers.

Zubac missed most of the matches due to an ankle sprain in his right ankle.  During his rookie season, he was assigned multiple times to the Lakers D-League affiliate Los Angeles D-Fenders.

Ivica Zubac: Salary and Net Worth

As the sources have estimated, this player’s net worth is around $3 million. He also receives a decent salary but the amount is unknown.

Unlike other players, he hasn’t been in any rumors but he suffered a controversy for his relationship with Larry Nance.

Moving towards Ivica Zubac’s body measurements, he has a good height of 7 feet 1 inch with a body weight of 120 kg. He has dark brown hair color and his eye color is also black.