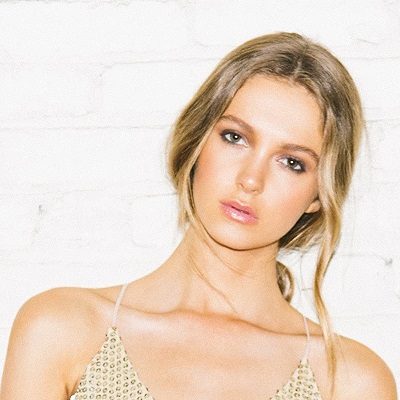 Ivy Matheson’s current relationship status is possibly single. Till the date, she has introduced anybody as his boyfriend or lover.

Also, she has not shared any details on her previous relationship and dating history. As of now, she is focused on her career as an actress.

Who is Ivy Matheson?

Canadian-American Ivy Matheson is a model and actress. She is renowned as Delia of The Lears, and Sarah of the Only Human.

Last, in 2019, she appeared in the movie, The Wrong Tutor as Emily Miller.

Next, she will be making her appearance in the series, I Would Have Kissed You as Baylor. As of now, the series is completed and waiting to be launched.

Also, upcoming movies, There’s Some Inside Your House and series, Firefly Lane are in the stage of being post-produced in the current date.

Ivy Matheson was born in Halifax, Nova Scotia. However, she spent most of her time in another sector, Seabright of the same province, Nova Scotia. As per the sources, she is in her mid-20’s and has Scottish ethnicity.

Being a very private person, she has not shared any details on her birthdate, mother, father, and siblings. Also, her academics details are behind the curtains.

Ivy Matheson started modeling when she was in school. At the age of 14, she attended the event, Canadian Models & Talent Convention that took place in Canada. After the event, she went to China for her modeling assignment.

Moving out of the school, she worked with various agencies in American and Asia. As a model, she got associated with the modeling agency including New York Model, Vivien, and Visage, Next Managements. With such agencies, she worked in various countries. That includes Korea, Japan, and Australia.

Currently, she has associated with talent management firms; Brave Artists Management, and NOMAD MGMT LA  as a model.

After working as a model for many years, she expanded her career as an actress. As an actress and model, she featured the various music video of the singer, Shawn Mendes.

In 2015, she made a debut in the TV industry with the TV Movie, Autumn Dreams as Young Annie. Later, in 2017, she made her appearance in the movie, The Lears. In the comedy-drama, she appeared as Delia.

Moving forwards, in 2018, she featured the movies like Only Humans, The New Romantic, and The Wrong Tutor. Last, in 2019, she appeared in the series, Supernatural as Camper Girl. Currently, the actress is busy with the various TV projects including I Would Have Kissed You and Firefly Lane.

As of now, she has managed to maintain dignity as a model and actress. Till the date, she has not been through any sort of controversy and scandal that created a buzz in the media.

Also, she has stayed far from any type of rumors too.

Ivy Matheson has brown eyes with brunette hair. Her height is 5 feet 9 inches and has an average weight. Her body measurements are 32-23-34 inches.

You may also read the bio of Alice Evans, Kate Phillips, and Drena De Niro.