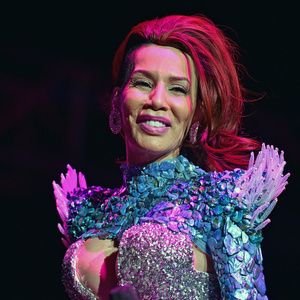 I was pregnant and I didn't even know it

I was having all the symptoms. I have a condition of migraines. When you have migraines you have the same symptoms. I thought it was a migraine but it lasted for a month and a half

My name is Ivelisse but they call me Ivy. I put together the Ivy and the Queen because you need a rank, bro. [laughs] Every woman has to be viewed as a queen. Viewing themselves as a queen is the point of it.

After divorce with Omar Novarro (Gran Omar) in 2005, she said that she never found Omar in the act of adultery if she had found that she would easily be accepted prison in Puerto Rico. After that, she was in a relationship with DJ Urba from 2006 to 2007.

Later, she was linked up with American actor Vin Diesel in 2010. Keeping aside the rumor, she then married to Puerto Rican choreographer Xavier Sánchez in late 2012. They have a daughter named Naiovy Kháli Star Sánchez. However, she has adopted 2 children before that.

Who is Ivy Queen?

Ivy Queen is a Puerto Rican singer well known for her sexually explicit lyrics in the Rap song. The Grammy-nominated rapper and composer is known as “La Reina del Reggaeton” (The Queen of Reggaeton).

The queen of rap battle has sang hit track “Quiero Bailar” and has won multiple awards for her hit single “Dime”, including urban song of the year.

Martha Ivelisse Pesante Rodríguez was known as Ivy queen the undisputed “Queen of Reggaeton,” was born on March 4, 1972, in Añasco, Puerto Rico but later moved to New York with her parents.

Later she returned to Puerto Rico before completing her graduation from high school in the eleventh standard. She also studied music at the New Jersey School of Performing. Her father’s name is Francisco Pesante and her mother’s name is unknown. There is further no information about her parents. She is of American and Puerto Rican nationality and is of British and Colombian ethnicity.

At the age of 18, she moved to San Juan and met rapper DJ Negro then she joined his group called “Noise”. With the Noise, she began her singing career and performed her first song “Somos Raperos Pero No Delincuentes” (We are Rappers, Not Gangsters).

Later, she released her solo album En Mi Imperio (In My Empire) which was quickly distributed by Sony Disco which features hit single ‘Como Mujer”. She then went to gives a plethora of hit singles including “Quiero Bailar”. Furthermore, she did not limit herself to singing only she also appeared in Play called Vagina Monologues by Eve Ensler. Overall she established herself as singer, songwriter, rapper, actress and record producer.

Ivy’s third studio album ‘Diva’(platinum edition) in 2003 was nominated for  “Reggaeton  Album of the Year” at the 2005 Billboard Latin Music Awards. Later on, in 2004, her hit single ‘Dile’ from the album ‘Real’ was nominated for “Tropical Airplay Track of the Year, Female”. She has bagged nomination for Best Urban Music Album at the 2011 Latin Grammy Awards and two nominations for also received two nominations at the 2011 Latin Billboard Music Awards.

Ivy has estimated net worth of around $10 million, however, salary is not known.

There are rumors about her sexuality whether she is gay, bisexual or straight but these rumors are due to her way of performing in stages and shows program. Other than that, she is far from controversy now and then.

Beyonce twin babies are still in hospital! Know the latest about her delivery here!