J. Alphonse Nicholson is an American well-named actor and percussionist. 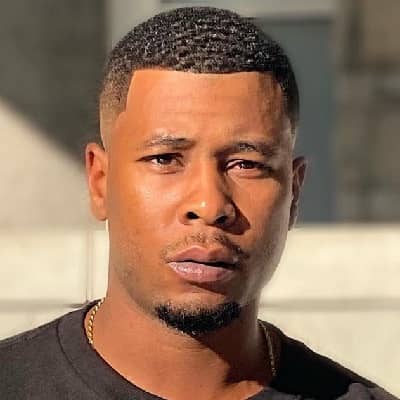 J. Alphonse Nicholson is a happily married man to his long-term girlfriend, Nafeesha Nicholson. However, there is not much information available regarding his wife and their wedding ceremony.

Nevertheless, the couple seems very happy and Nicholson often shares pictures of his wife on his respective social media platform. The couple together has a son and J is very close with his son.

Who is J. Alphonse Nicholson?

J. Alphonse Nicholson is an American well-named actor and percussionist. He is best known for his notable works including P-Valley, Just Mercy, Mr. Robert Season 2, and Chicago PD.

He is currently a brand ambassador of Ball Family Farms.

The actor was born on July 6, 1985, in Greensboro, North Carolina. At present, he is 35 years old and his Zodiac sign is Cancer. He holds an American nationality and belongs to the Afro-American ethnicity.

He hasn’t yet disclosed his parent’s details in the media. However, he has a sister named Sade Nicholson.

Talking about his academics, he enrolled at James B. Dudley High School.

For further studies, he attended North Carolina Central University majored in theater. However, he later dropped out of school and then started pursuing his career.

Prior, J was a street drummer and one of his director friends saw his video and gave him the opportunity to compose a show at the Lincoln Center Education program. Through his street journey, he landed in the acting field and he made his first role in Howard L. Craft’s show, “Caleb Calypso and the Midnight Marauders”.

Afterward, he got a major breakthrough with his appearance in the TV series, P-Valley where he portrayed the role of Lil Murda. Similarly, he has appeared in several broadways like Roundabouts “A Soldiers Play”, OFF-BROADWAY: Signature Theatre’s PARADISE BLUE (Blue), 2nd Stage “Days of Rage” and “FREIGHT” (NFT).

In 2016, he made an appearance in an episode of Marvel’s Netflix television series, Luke Cage where he portrayed the role of Darnell. He starred in the 2019 biographical legal drama film, Just Mercy as Henry Davis. He starred along with Michael B. Jordan, Jamie Foxx, Rob Morgan, and more.

Lately, he was cast in the role of John Robinson in the 2020 Netflix miniseries, Self Made. The series is based on the biography of A’Lelia Bundles’s On Her Own Ground. Furthermore, some of his notable films and television series are Blue Bloods (2010), Shots Fired (2017), The Backlist (2013), Tales(2017) , and more.

To date, Nicholson has able to maintain his clean profile. He hasn’t involved in any sorts of rumors and disputes that a huge buzz in the media.

As of 2021, Nicholson has an estimated net worth of around $900 thousand throughout his successful profession. Furthermore, his salary and yearly income are still under review.

The actor stands at the height of 5 feet 8 inches tall and weighs around 80 kg. He has a brown complexion and an Afro hairstyle. Likely, he has dark brown pair of eyes color with black hair. Further, his chest, waist, biceps, and hip sizes are 40, 28, 36, and 36 inches respectively.

All of his social media sites were already verified. Furthermore, he has a self-titled Youtube channel where he has garnered nearly 3.67k subscribers.