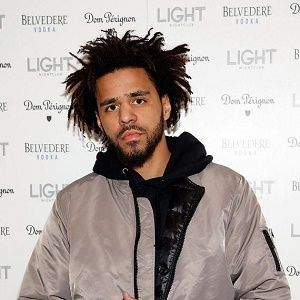 There's been people who've rapped and produced - like Kanye - but I don't feel like on the rapping side there's ever been a producer who can rap as good as I think I can rap.

My parents were divorced by the time I was even conscious - like, I don't remember them ever being together.

The thing about being an artist today is you get to develop right in front of people's eyes before you even put out an album.

On talking about his relationship, he is a married man. He tied a knot with  Melissa Heholt, Executive Director of the Dreamville Foundation whom he met in St. John’s University. The couple has been blessed with one child in December 2016.

Their marriage date and name of the child has not been publicised yet. They are living a happy life with no signs of divorce.

J. Cole is a songwriter, singer, rapper, and record producer belonging to America. He is best known for rerecording his five studio albums, including “2014 Forest Hills Drive”,  “Cole World: The Sideline Story”, and “4 Your Eyez Only”.

The rapper was born to  Kay  Cole as Jermaine Lamarr Cole in Frankfurt, Germany at an American military base 0n the 28th January 1985. His father name is currently unknown.

His father is a veteran and uses to work in the U.S. Army whereas his mother serves in the United States Postal Service as a postal worker. His father abandoned his family sooner and Cole’s mother raised him and his brother Zach in the US, North Carolina. This provided J and Zach Cole the chance to grow up in a multi-ethnic environment.

However, Cole started rapping at the very young age i.e., twelve. Cole got hooked to music production upon getting a music sampler on Christmas from his mother.

On talking about his education, he migrated to New Tork city and attended St. John’s University taking computer science as a major subject after passing out the high school with a 4.2 GPA.

Firstly, the record producer’s career initiated at a young age when he and cousin began to study the basic nuances and tricks of music production on their own. Then, They developed and created lyrics together. Cole initiated refining his music production skills after getting a drum machine from his mother. He started sending out his mixtapes to some of the best-known names in the business like Jay Z and Eminem, but to no avail at the age of 16.

Moreover, Cole already had recorded his first mixtape ‘The come up’ in the hope of being a success but got disappointment instead. He used to stand outside Jay-Z’s office for hours. He understands his time had come finally after getting a call from the man himself. Cole could not impress Jay Z  initially, but his passion made Jay z grant him an opportunity to appear in one of the songs for his album ‘The Blueprint 3’. Thereafter, Cole initiated collaborating with several artists and recorded his second mixtape in June 2009.

On talking about his awards and achievements, the singer was nominated in the Best Rap Performance segment for the Grammy awards for his song  ‘Apparently’. The album was selected for the Best Rap Album award.

J. Cole: Salary and the Net worth

On talking about his salary, he earned a decent amount of salary from his career but has not currently disclosed to the media. His net worth is estimated to be $2.5 million.

Cole and Diddy were reported to be involved in an altercation after party at a 2013 MTV Video Music Awards in New York City in August 2013.  The incident began after Diddy tried to confront rapper Kendrick Lamar over the “King of New York” claim in his “Control” verse. Diddy tried to pour a drink on Lamar where Cole intervened between them. The two began arguing. Cole and Diddy came into an altercation that led to problems between their respective crews.

Aside, the songs “False Prophets” and “Everybody Dies” created controversy within the hip-hop community since lots supposed that “Everybody Dies” contained shots focused at fellow rappers Lil Uzi Vert and Lil Yachty in 2016 upon the release of Eyez documentary. Wale recorded a track entitled “Groundhog Day” as a response to “False Prophets” on December 3. The pair got spotted together at a North Carolina State University basketball game later that day in Raleigh, North Carolina.