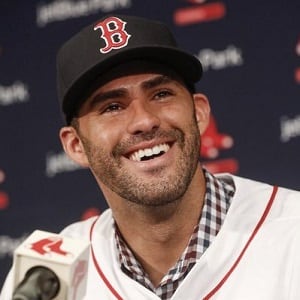 J. D. Martinez is currently in a relationship with former cheerleader Ariana Aubert. The pair attended Flanagan High School together. They do not have any children from this relationship.

J. D. Martinez is an American professional baseball outfielder and designated hitter. Currently, he plays for the Boston Red Sox of Major League Baseball. Additionally, he has also played in MLB for the Detroit Tigers, Arizona Diamondbacks, and Houston Astros.

Martinez was born as Julio Daniel “J. D.” Martinez in Miami, Florida on August 21, 1987. He was born to parents Julio Martinez and Mayra Martinez. Additionally, he developed a keen interest in the world of baseball since his childhood years. He is of American nationality. Furthermore, there are no details available about his ethnicity at present.

After graduating in 2006, Martinez was selected by the Minnesota Twins in the 36th round, with the 1,086th overall selection. However, he did not sign but instead played college baseball for the Sharks from 2007 through 2009. Additionally, he was later selected by the Houston Astros in the 20th round of the 2009 Major League Baseball draft. In his three years at Astros, he hit .251 with 24 home runs. Furthermore, in the 2014 season, the Detroit Tigers signed Martinez. In addition, in his first 17 games, he hit 10 home runs and drove in 22 runs.

Martinez won the Houston Astros Minor League Player of the Year in 2010. In addition, he has won 8 MLB Player of the Week. In 2015, he won the Silver Slugger Award. Furthermore, he also won the Hank Aaron Award in 2018.

Martinez’s current salary is 23.75 million USD. He has an estimated net worth of around $ 110 million at present.

Martinez became part of a controversy in 2013 after he posted on Instagram a quote that the anti-gun control advocates have falsely attributed to Adolf Hitler. At present, there are no rumors concerning Martinez’s life and career.

Talking about his body measurement, Martinez has a height of 1.91 m. Additionally, he weighs around 99.8 kg. Furthermore, his hair color and eye color is dark brown.