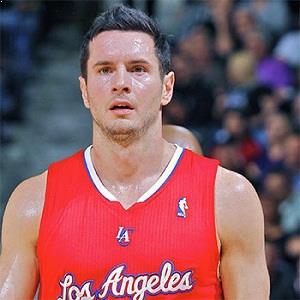 Just found out that I set the record for most long 2s in a 3 Point Contest. Ever. Couldn't be prouder

I would be more surprised when Dwight starts taking responsibility. That would be the most negative thing I can say, but that's the truth. You can't take all the credit and not accept any of the blame

I couldn't even watch a Big East game without the announcers talking about Duke or talking about me. The amount of scrutiny and attention we get here is amazing. It's gotten to the point now, where the last two weeks are so stressful that I haven't even watched a college basketball game. Because I can't do it anymore, it just stresses me out.

What is the relationship of J.J. Redick?

Reflecting on the personal life of J.J. Redick, he is married to his long-time girlfriend Chelsea Kilgore. The couple got into a married relationship on 26 June 2010, being in a relationship for several years.

They have been blessed with one son, Knox Redick. Previously, he also had an encounter with Vanessa Lopez in the year 2007.

J.J. Redick is a well-known American professional basketball player who has been playing basketball since high school.

He is best known as a player from Los Angeles Clippers wearing jersey number 4.

J.J. Redick was born in Cookeville, Tennessee. He was born on 24 June 1984. As of 2022, he is 38 years old. He is of North-American ethnicity and has an American nationality.

He is the son of Jeanie(mother) and Ken Redick(father). His birth name is Jonathan Clay ‘J.J.’ Redick. He has one younger brother, David and elder twin sisters, Catie and Alyssa.

For his schooling, he joined Cave Spring High School in Roanoke, Virginia where he was honored as McDonald’s All-American.

After completing high school he joined Duke College where he majored in history and a minor in cultural anthropology.

Redick started playing basketball professionally as soon as he graduated. He is active in the sports field since 2006 and he is still playing. He started playing from Orlando Magic after being selected in the 2006 NBA draft.

Being in Orlando Magic turned out frustrating for him cause he wasn’t getting much time to play in the games.

He asked his agents if there was a possible trade but the coach clearly told him he won’t be getting any trade until its deadline. On 13 June 2006, he was arrested and charged $1000 for drunk driving.

On 9 July 2010, Chicago Bulls signed him to a three-year contract with $19 million offer but Magic matched this offer retaining the rights to Redick.

On 21 February 2013, he was traded to Milwaukee Bucks but he soon left the team being acquired by Los Angeles Clippers.

On 10 July 2013, he signed a four-year contract with Los Angeles Clippers with $27 million and he has been playing for the Clippers wearing a jersey number 4.

His net worth is estimated to be is $47 million and his salary is around 6.75 million USD.

He suffered controversy when his model girlfriend claimed to be pregnant and they signed a contract in 2007.