J P Arencibia is a popular Cuban American former professional baseball catcher and now a studio commentator on Bally Sports Florida. He is currently in a relationship.

He was dating Kimberly Perry the band member of The Band Perry. After knowing each other they became engaged on September 30, 2013, and married on 12 June 2014. But due to some reason, they parted ways in March 2018.

After that, he started to date fellow Fox Broadcaster Tomi Lahren in early 2021. They also confirmed their relationship through their Instagram account in August 2021. Now they have announced their engagement in September 2021. 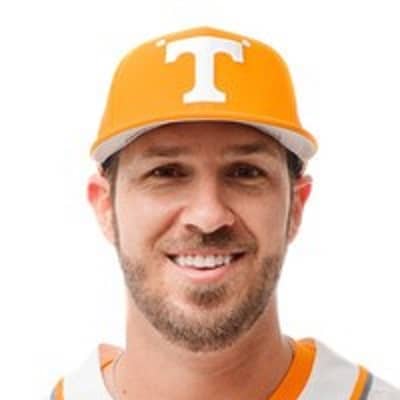 Who is J P Arencibia?

From 2010 to 2015, he played in Major League Baseball with the Toronto Blue Jays, Texas Rangers, and Tampa Bay Rays.

Jonathan Paul Arencibia was born on the date of 1986/1/5 in Miami, Florida. He holds the Nationality of the United States and holds the Cuban-American Ethnicity.

His maternal grandparents were of Basque and Canarian descent from Cuba, and they moved to the United States with his mother when she was only two years old. He hasn’t shared his parent’s and siblings’ details with the local public.

He went to attend his high school named Westminster Christian in Miami, Florida. He also played the games like football and basketball in his high school but excelled in baseball. Later he played Under-18 Florida Bombers.

After that, he attended the University of Tennessee where he played college baseball where he had won awards like USA Baseball Richard W “Dick” Case Player of the Year in 2006.

Because he was a good defensive catcher, the Blue Jays elected to maintain him as a catcher rather than move him to first base. He also played baseball in Cuba.

This organization selected him 21st overall in the 2007 MLB draft. He began the 2008 season with the Florida State League’s Dunedin Blue Jays.

He led the FSL in numerous offensive statistics before the all-star break, and he concluded the first half-season hitting 315 with 13 homers, 22 doubles, and 62 RBI.

Following this game, he was promoted to the Blue Jays’ Double-A team, the New Hampshire Fisher Cats of the Eastern League. During the 2008 offseason, he played with the Phoenix Desert Dogs in the Arizona Fall League.

In 2010, he made his MLB debut for the Toronto Blue Jays against the Tampa Bay Rays. Then, on September 1, he returned to Las Vegas. Therefore, optioned back to Triple-A to make place for the return of John Buck.

He began his career as a catcher with the Blue Jays in the 2011 home opener, where he led and won several games against the Kansas City Royals, Tampa Bay Rays, and Boston Red Sox.

He was made a free agent for the first time in his career on December 2, 2013.

On January 8, 2015, he signed a minor-league deal with the Baltimore Orioles with an invitation to spring training & was dismissed on April 9.

Arencibia then signed a minor league contract with the Tampa Bay Rays on April 16 & was released on August 26.

On 14 December 2015, he announced to sign a minor league contract with the Philadelphia Phillies & dismissed it on 16 May 2016.

On May 20, 2016, he returned to sign a minor league contract with Tampa Bay. He retired from professional baseball on January 18, 2017.

In 2019, he started work as a studio before and postgame commentator for Marlins broadcasts on Fox Sports Florida.

He is a popular baseball player who has a net worth of $1.8 million as of 2022. His all primary source of money comes from his career and he is yet to disclose his annual salary.

There was an announcement of retirement from the game in a message on Twitter in 2017. Therefore, he said,” I never could take a walk in my career but this walk will be my biggest yet, I am walking away from the baseball.”

J P stands at the height of 6 feet but has not disclosed his measurement and weights. Looking at his appearance he has brown eyes and black hair.

He is frequently active on networking sites. On Instagram he has 26k followers, on Twitter, he has 1.1M followers, and on Facebook, he has 1.6k friends.