Who is Ja Morant Dating?

At the moment, Ja Morant isn’t married to anyone. He is, however, in a relationship with KK Dixon, his girlfriend. They met when they were in high school and have been together ever since.

The couple also has a daughter, Kaari Jaidyn Morant, who was born on August 7, 2019. 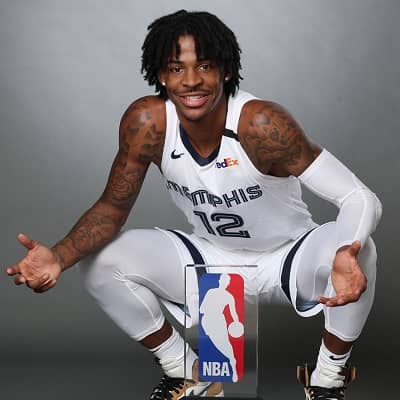 Who is Ja Morant?

Ja Morant is a professional basketball player with the National Basketball Association‘s Memphis Grizzlies (NBA). He was a unanimous first-team All-American as a sophomore with the Murray State Racers in college basketball in 2019.

Ja Morant was born on August 10, 1999, in South Carolina. As of now, he is 22years old. His full name is Temetrius Jamel Morant. Talking about his nationality, he holds an American identity.

He was born to Tee and Jamie Morant. His mother was a high school point guard and a collegiate softball player, while his father was Ray Allen’s high school teammate and played basketball for Claflin University.

Tee considered playing pro ball overseas after playing semi-professionally. When Jamie became pregnant with Ja, he gave up his basketball career and stayed at home to raise his child, instead of becoming a barber.

Ja Morant is a professional basketball player with the National Basketball Association’s Memphis Grizzlies (NBA). He was a unanimous first-team All-American as a sophomore with the Murray State Racers in college basketball in 2019.

In the 2019 NBA draft, the Grizzlies picked him with the second overall pick, and he was voted NBA Rookie of the Year in 2020. Morant was selected to his first NBA All-Star Game as a starter in 2022.

On November 10, 2017, he made his college team debut. He had 7 points and 11 assists in his first game. Similarly, he set a season-high with 23 points against Southeast Missouri State University on February 1, 2018. His exceptional dribbling talents have impressed both his teammates and opponents.

Morant’s skills improved much more during his sophomore season. He was chosen as one of 20 players to attend Chris Paul‘s Elite Guard Camp. In his sophomore year, he took over as the team’s captain. He kept leading his group. Despite the fact that some of the team’s best players had left, Morant assumed command and leadership of the group.

The Memphis Grizzlies selected Morant second overall in the 2019 NBA Draft. He signed a two-year contract with Memphis in July of 2019.

The total contract value was over $17,897,010 USD. On the same day, he began his professional basketball career on October 23, 2019. The game was against the Miami Heat.

Morant also recorded his first-ever triple-double against the Washington Wizards on February 9, 2020.

Morant had 37 points and six assists in the Grizzlies’ season opener against the Cleveland Cavaliers on October 20, 2021.

Morant scored a season-high 41 points, including a career-high six made three-pointers, to lead Memphis to a 104–99 win over the Lakers on December 29.

Throughout his NBA career, the young basketball player has amassed a sizable fortune. Ja Morant’s net worth is believed to be $3 million USD as of 2022.

He maintains a luxurious and comfortable life. He makes money through his brands and sponsors in addition to his NBA career.

Owing to his professional career, he hasn’t been a part of unwanted rumors and controversy. He appears to be avoiding unwanted scandals and has kept a clean image to the public.

Ja is considered one of the NBA’s most athletic players. He is a tall man, standing at 6 feet and 3inches tall. He weighs around 75 kgs. 42-30-35 is his physical measurement.

He, too, has a pair of black-colored eyes and brown hair.

Also, more than a 2.4million people him on Facebook. Whereas, he doesn’t have Tiktok and Youtube accounts.

Who will win the Miss World 2019? Top 20 Final Prediction! Know it all here