Jac Collinsworth an American reporter and celebrity's child. He is currently single. 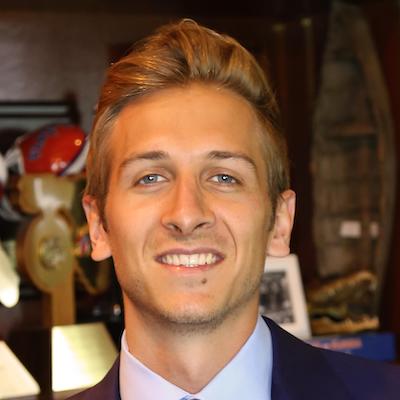 What is the relationship of Jac Collinsworth?

Jac Collinsworth is currently possibly single. The details of his present affair and girlfriend are unknown.

In the past, rumors of him dating Nicole De Francisco surfaced. However, there is no solid information about this news.

Who is Jac Collinsworth?

Jac Collinsworth is an American reporter and celebrity’s child. At present, he works for NBC Sports and hosts a show named Distanced Training: Ready to Get Back in the Game.

He is known for being the son of a former NFL wide receiver player, Cris Collinsworth.

His birthdate is 03 Feb 1995 and he was born in Fort Thomas, Kentucky, U.S.A. The name of his mother is Holly and his father’s name is Chris.

Plus he attended Highlands High School and is a graduate of Notre Dame University.

Jac Collinsworth is now with NBC sports where his dad also works. He joined the network in March 2020. Before this, he used to work for ESPN as a features reporter. Here he hosted Sunday and NFL Live.

He also worked for networks such as ACC Network, The Huddle, and more. During his college days, Jac was active in covering games. He used to report for Notre Dame football via a podcast Showtime’s A Season.

But his dad has Chris of over $16 million with a salary of $4 million per year. He and his wife re-built a property in Fort Thomas, Kentucky. They added a barn, pool, and pool house.

Jac Collinsworth’s height and body weight are of average size. Similarly, his eyes are blue and his hair color is brown.