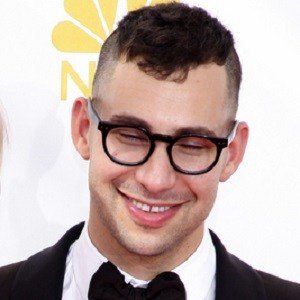 Black and white creates a strange dreamscape that color never can.

When you go all over the world for work, your dream vacation is your bedroom.

I want to come and play in cities and states where transgender citizens are not discriminated against, where there's no hateful bathroom bills at the shows where I'm going to be playing.

Reflecting on a personal life of Jack Antonoff, he is in a romantic relationship with American screenwriter Lena Dunham. The couple has started dating since 2012.

The couple is living in a happy relationship having no rumor on their separation. Previously, he was in a romantic relationship with Alia Shawkat in 2009 but their relationship couldn’t make it towards marriage.

They eventually broke up in the year of 2010. He was also in a relationship with Scarlett Johansson in 2001 which soon ended in 2002.

Who is Jack Antonoff?

Jack Antonoff is an American musician, singer, songwriter and record producer. He is good with Guitar, Vocals, Drums, Piano, and Mandolin. Antonoff rose to fame for being the lead singer and songwriter of the band Bleachers. He is also a lead guitarist for the indie band Fun.

The son of Shira and Rick Antonoff, Jack Antonoff was born in Bergenfield, New Jersey. He was born on 31 March 1984 and named as Jack Michael Antonoff.

He is the middle child of three children. Her younger sister died at the age of 13 due to brain cancer. He is of Ashkenazi Jewish and has an American nationality.

Antonoff studied at an elementary school at the Solomon Schechter Day School and attended the Professional Children’s School. At this point, he has formed a punk rock band called “Outline.”

Talking about career journey of Jack Antonoff, he is active in the entertainment field since 2000 and he is still active in it. In 2002, he formed a band Steel Train together with his friend Scott Irby-Ranniar and became its lead singer. Next, they added three members of the band, Matthias Gruber, Evan Winiker and Matthew Goldman.

Afterward, Steel Train secured a recording deal with Drive-Thru Records. In 2008, he became the band member of a new band Fun together with Nate Russ and Andrew Dost. They released their first debut album Aim and Ignite in 2009. In 2012, they released their second album Some Nights. Their song We are Young became the number one hit single and Sight of the Sun was featured in the HBO series Girls.

He won the Grammy Award for Song of the Year for writing “We Are Young” with Nate Ruess, Andrew Dost & Jeff Bhasker. Together with Sara Bareilles, he has co-written a song Brave which got adopted as a gay anthem in 2013.

Antonoff has also co-written a song Sweeter Than Fiction with Taylor Swift for the Weinstein Co. film, One Chance. Similarly, he helped Swifts hit singles like Out of the Woods, I Wish You Would, and You Are In Love. He won Grammy Award for Album of the Year for his work on Taylor Swift’s 1989. In 2014, he announced a solo project called “Bleachers”. The songs for the debut Bleachers album were mostly written on Antonoff’s laptop computer in hotel rooms during a fun world tour.

Jack Antonoff: Salary and Net Worth

His success in career path has paid him well financially making his net worth estimated to be $4 million.

He was rumored to be engaged to her girlfriend Lena Dunham.

Jack has a height of 5 feet 7 inches. His hair color is dark brown and eye color is brown. His height, weight, shoe size is unknown.