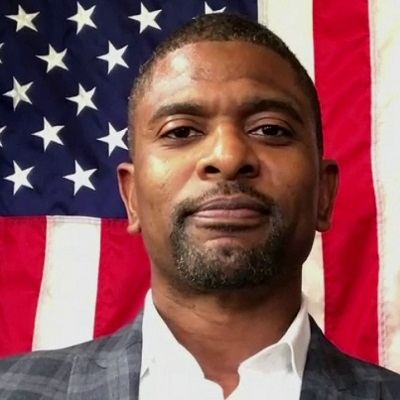 Jack Brewer is in a relationship. However, the details of his romantic partner is unknown. Till date, he has not shared any details on his love life.

He is a proud father of four children including two daughters and sons. As of now, he has not revealed the names of his children.

However, he often shares pictures of his children on Instagram.

Who is Jack Brewer?

American Jack Brewer is a former football player and entrepreneur. He is renowned as the founder and CEO of Brewer Sports International.

Currently, he is associated with the Fordham Gabelli School of Business Program Director.

Jack Brewer was born on the 8th of January 1979 in Fort Worth, Texas. He is of Mixed (British, French, Germanic) ethnicity.

Till date, he has not shared any details on his family background including mother, father, and siblings.

Talking about his educational background, he graduated from Grapevine High School in Grapevine, Texas. At the time, he was extremely active in Football and Track.

Later, he completed his freshman year at Southern Methodist University in University Park. At the time, he used to play as a wide receiver for the University’s football team. He completed the season with 19 receptions for 352 yards. Also, he became the Disney World Record Holder for the track.

From the same University, he earned a master’s degree with Honors in Sports management. Apart from that, he has also completed executive business programs at Harvard Business School and The Wharton School of Business.

In 2002, Jack Brewer signed the Minnesota Viking as the free agent. For the team, he also worked as the Team Captain for the 26 special teams as a rookie. In 2004, he joined the New York Giants as Team Captain.

The following year, he joined Philadelphia Eagles as Team Captain. At the time, he led 16 special teams tackles in 7 games.

In 2007, he expanded his career as an Investment adviser with the Private Client Group, Merrill Lynch. Moving forward, April 2006, he founded the company, The Jack Brewer Foundation. Also, he became the executive director too. In January 2009, he became the CEO of The Brewer Group. Also, he happens to the portfolio manager of the group

In April 2012, he became the Senior Advisor to H.E Joyce Banda. Apart from this, he also acts as an Advisory Board Member of Queens Museum of Arts, executive committee member of United Nations Foundation’s Girl Up Campaign, Ambassador, and National Spokesperson of National Police athletic.

Since May 2019, he is active as Program Director of Fordham Gabelli School of Business part-time.

He has once supported Barack Obama. However, he turned against the Democratic Party. Currently, he is supporting Donald Trump. He calls Trump the First Black President.

Also, he tweeted the Trump has done more for black than any President since Lincoln.

As of 2020, he has an estimated net worth of $1 million. His earnings as the CEO of Brewer Group Inc. are in the range of $74k to $104k. Apart from that, he also makes through the profit of his business ventures too.

Also, his earning as the program director of Fordham Gabelli School of Business are $71k to $226k.

Jack Brewer has black eyes with black hair. His height of 6 feet and weighs around 86 kg.

On the 6th of August 2020, U.S. Securities and Exchange Commission pressed charges against him for insider trading. He was a former investment advisor of the Brewer Capital management. At the time, Brewer was also consulted with the COPsync.

During the time, he received confidential information regarding the share price of the company that was going to drop.

Despite his obligations to the company to maintain its confidentially, he used it for his personal benefit and sold his stocks that 100,000 shares in the price ranging $1.01 to $1.16. From his sales, he gained a profit of around $35,000.

You may also read the bio Ben Foster, Brad Green, and John Stones.