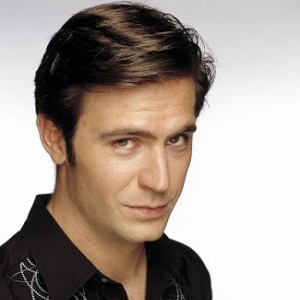 Ask Mother for advice on breaking into show business

During my childhood, I was surrounded by actors, and all I remember is they were fun to be around. That kind of sticks.

Jack is a married man, he is married to his girlfriend Michelle Gomez who is an actress. They started their married life on May 1, 2000. Jack and Michelle shared a lovely and romantic relationship of more than 16 years. In between, they had a son named Harry who was born in 2010. Jack along with his wife and son lives a very happy life and there is no sign of any divorce or breakups.

Who is Jack Davenport?

Jack Davenport is an English actor known for his role in the television series The Life, Coupling, and Pirates of the Caribbean. Similarly, she performed in movies like The Talented Mr. Ripley. He also had his lead role in Breathless.

Jack Davenport was born in Wimbledon, London on March 1, 1973. His nationality is British and his ethnicity is English.

He went to Dragon School in Oxford because his parents don’t want him to be involved in proceedings. After his schooling, he went to Cheltenham College.

In the beginning, Jack didn’t want to be an actor. His performance in a summer drama course was appreciated by a director from Clwyd Theatr Cymru and offered him to work. He performed a small role in Hamlet.

After that, he attended the University of East Anglia concentrating in Film Studies and English Literature. Jack planned to be off-camera because she was not comfortable in front of the camera and thought of becoming a member of the film crew. He wrote to John Cleese to gain some knowledge behind the camera as suggested by her mother. Whilst a small part with few lines it provided his first opportunity to work in front of the camera.

Later he got a chance in the BBC television drama series This Life. Since then his career took a new turn. He had his many roles in movies and televisions like The Talented Mr. Ripley, Offending Angels, Gypsy Woman, Not Afraid, Not Afraid. His movie Pirates of Caribbean: The Curse of the Black Pearl broke the records on box office also followed by its sequels Dead Man’s Chest, At World’s End.

Jack also gave his voice-over for The Thirty-Nine Steps, A Clockwork Orange and also for British Mastercard Advertisement. Jack was also cast in Swingtown, FlashForward, Smash, Breathless, and much more. He was cast in the ABC pilot FlashForward, which was based on a Robert J. Sawyer novel. Apart from it Jack also played in the movie The Key Man(2011), Death Knight Love Story(2014), Kingsman: The Secret Service (2015).

Jack Davenport: Salary and Net Worth

He has a net worth of $4 Million but his salary is not revealed yet.

Jack has a height of 6 feet 2 inches. His bodyweight is 83 kg. Besides these, he has light brown hair and greenish-brown eyes. Furthermore, there are no details regarding his body measurements.