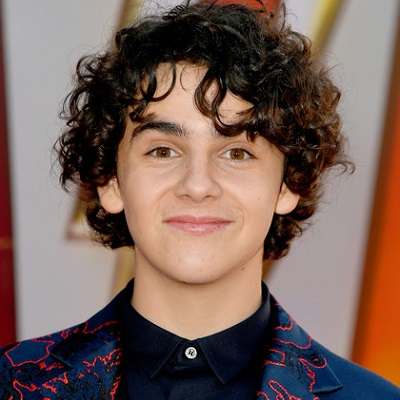 Previously, he was in a relationship with the Instagram Star, Ellie Hiyar.

Who is Jack Dylan Grazer?

American Jack Dylan Grazer is a Fright Meter Award-winning actor. Grazer is renowned as Eddie Kaspbrak of the movie, IT and IT Chapter Two.

Last, in 2020, he appeared in the TV series, We Are Who We Are as Fraser Wilson.

Jack Dylan Grazer was born on 3rd September 2003 in Los Angeles, California, United States. He is of British-Irish ethnicity.

He happens to be the son of Gavin Grazer and Angela Lafever. His father, Gavin is an actor, director, and producer. Also, his uncle, Brian is also an Oscar-nominated producer, actor, and writer. She has a younger brother, Bowie Gavin Grazer Bowie.

Moving towards his academics, he is a graduate of the Adderley School. He graduated from the School with Honors in Performing Arts. During the time interval, he used to perform in the various productions house. As of now, the actor provides a scholarship for the two students in the Adderley School.

Born in a showbiz family, he made his acting debut with the TV series, The Greatest Event in Television History as a son. Later, in 2015, he made his movie debut with the horror-comedy, Tales of Halloween. In the movie, he portrayed the character of Young Stranger.

In 2017, he featured the series, Scales: Mermaids Are Real as Adam where he shares the screen with Emmy Perry. The following year, the movie, IT took place. In the horror movie, he portrayed the character of a sickly boy, Eddie Kaspbrak. The movie became one of the turning points of his life.

Recently, in 2020, he featured the TV series, We Are Who We Are. In the movie, he played the character of a 14-year boy, Fraser Wilson who moved to New York to a military base in Veneto with his mothers.

He has brown eyes with brunette hair. He stands at a height of 5 feet and 7 inches and weighs around 61 kg.

Back in 2018, a video was leaked where the underaged actor, Jack (14 years old) at the time. In the video, it appeared that the young actor was smoking which appeared to be marijuana as well as vaping.

After that, the actor posted an apology video on Instagram where captioned growing up and making mistakes and learning from the mistakes. Also, he mentioned that the past is the past and it doesn’t definite who you are.

He also has a self-titled YouTube channel with 355k subscribers with more than 6.28 million views.