Jack Gilinsky is one of the Jack & Jack pop duo members. Another Jack is Jack Johnson, one of his best friends from kindergarten. Jack is also in the limelight because of his affair with Madison Beer. 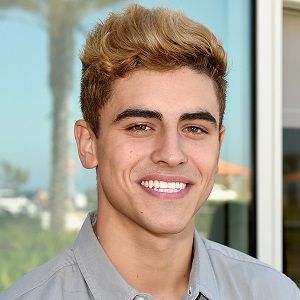 On and Off Affair with Madison Beer

Previously, he was in a relationship with Madison Beer, an American singer. They were dating each other from 2015. But, eventually broke up in 2017, and the reason for their breakup was alleged verbal abuse.

Again in August 2019, Jack and Madison were spotted in a restaurant in West Hollywood and making out together. They shared a kiss in public. Seems like they cannot forget each other and wants to give one more chance to their relationship.

Also, the audio of a phone call between Madison and Jack was leaked. This has made many of us believe that he is still in a relationship with Madison. But, only Jack can enlighten us with the details of his personal life.

We thought that now they have sorted out their previous problems and are happy together, however, it is not true. They are not together currently.

Also, there was a rumor about his relationship with Andrea Russett in the past. And as of now, there is not any news about his new relationship.

Who is Jack Gilinsky?

Jack Gilinsky is an American musical artist. He is widely popular as one of the members of the American pop-rap duo Jack & Jack.

In addition, he has also established himself as an Instagram celebrity with millions of followers.

Jack Finnegan Gilinsky was born on September 10, 1996,  in Omaha, Nebraska, the U.S. to David Gilinsky, father, and Katherine Finnegan, mother.

He also has two sisters, Molly Gilinsky and Laura Gilinsky.

Jack is of Czech and Russian Jewish ancestry.

Talking about Jack’s childhood, he was raised in his hometown. However, many of his childhood details are currently missing.

As regards Jack’s academic qualifications, he is graduated from Westside High School. And he has decided to progress his musical career over an academic career.

Jack Gilinsky initially gained his fame after attracting 3.7M followers on Vine where he started to post videos with his friend Jack Johnson. This was their first fame gaining work. Prior to the start of his high school, the duo was widely famous on YouTube under the name of channel MotherFalconeQuagmire.

However, his major success came in the form of Jack & Jack. The duo was quickly on the awards nominations after their year-long professional practices. They released many singles such as Distances, Flights, Paradise, Wild Life, Tides, Groove. California, and several others.

In 2017, the duo released Gone which includes five songs. And many of their songs are equally famous. Furthermore, the duo has also collaborated with Demi Lovato, Trevor Moran, Tyga, Kid Ink, and several others.

Also, he is active in promoting skin-cancer awareness and anti-bullying content.

As of now, there are not any awards under his own name. However, his duo group has had enormous success so far.

His song Wild Life was able to be listed on U.S Billboard Hot 100. Also, they won the MTV Woodie Awards and has got a nomination for Teen Choice Awards.

As regards Jack’s salary and net worth, his net worth is about $2 million. Since he has just started his career, he has a huge amount of wealth yet to earn along with his fame.

In the past, there was a rumor about his breakup with Madison Beer. However, this later turned out to be false news.

Also, the age gap between Jack and Madison has been a controversial topic for a long time.

Recently, the audiotape of his phone call with Madison was leaked. In the audio, Jack was verbally abusing his girlfriend Madison. However, later he apologized for his bad behavior.

Jack Gilinsky is 5 feet 10 inches tall guy. He also weighs 71 Kg. Furthermore, his chest, arms, and waist sizes are 39, 14, and 33 inches respectively. And, he has black hair and brown eyes.

Madison Beer: Popular with help of Justin Bieber!!! Did She and Her Boyfriend Jack Split?!Is She Dating Justin Now??!!!!