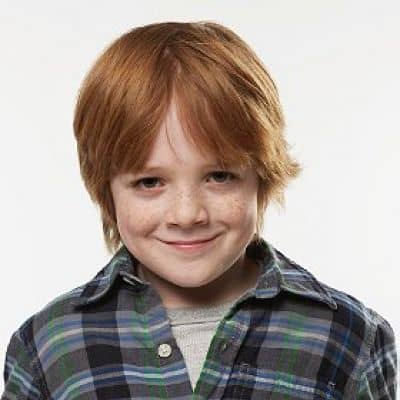 Talking about his love life, Jack Gore is presently single and he is not dating anyone. Jack is too young to be in love affairs and all.

It seems he is focused on making his career at present and hardly shares any private things.

However, the juvenile actor often shares pictures with his co-stars on social media.

Who is Jack Gore?

Jack Gore is a well-recognized American actor as well as a TV actor. Gore is widely famed for his role as Timmy Cleary in the American series, The Kids Are Alright in 2018.

Jack is the son of his father, Richard Gore whereas his mother’s details are not known. Moreover, he has a brother and a sister as well named Phoebe. His dad is a photographer.

Talking about his nationality, Gore holds an American identity whereas his ethnicity is Caucasian.

Regarding education, the actor has not mentioned his educational details in the public. But, he is presently studying in a special Internet Education System that is mainly focused on child actors.

The young talented actor, Jack Gore was very passionate about the acting industry from an early age. Jack made his acting debut as Rory Parker in the 2013 American horror film, We Are What We Are. The same year, the actor emerged as Graham Henry in 22 episodes of the American sitcom TV series, The Michael J. Fox Show (2013-14).

Additionally, Gore performed in an episode of the TV series, Law & Order: Special Victims Unit(2016). Jack came into the limelight after portraying the role of Timmy Cleary in the American sitcom TV series, The Kids Are Alright(2018-19). Additionally, he earned fame as Gordie Axelrod in 18 episodes of the American TV shows, Billions(2016-present).

Freshly, Gore was a member of the American sci-fi adventure film, Rim of the World. Other co-stars are Miya Cech, Alessio Scalzotto, King Bach, and Benjamin Flores Jr.

Some of his other television appearances are as follows:-

He has been actively working in his profession from 20213 till the present.

It is reported that Jack Gore has an estimated net worth of $500 thousand. He has performed in some blockbuster movies such as Ferdinand alongside John Cena, Kate McKinnon, Anthony Anderson. The movie had collectively earned $111 million at the box office.

However, the young talent has not disclosed his exact salary, earnings, and assets details till now.

Jack has never been part of any controversial matter or rumors till now. The actor is too young to get into any kinds of rumors or controversy.

It seems that Gore prefers enjoying his personal life and does not want to merge it with his professional life.

15 years young star, Jack Gore has a cute smile, smart looks, and an admirable personality. He stands at a height of 5 feet 6 inches. Also, he has a balanced body weight of 47 kg.

Furthermore, Gore has green eyes whereas his hair is blonde. His biceps size is 9 inches.

Regarding his social media presence, Jack Gore is an active personality on social media. Jack has more than 66.3k followers on his official Instagram account @realjackgore.

Nevertheless, Jack is not available on Facebook at the moment.