Jack is an English actor. Jack Huston began going out with the American model, Shannan Click, in 2011 and they have been in a relationship ever since. 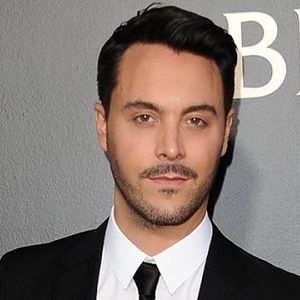 You can almost read any emotion through someone's eyes. Having one eye, that eye has to do double time. [Richard Harrow]'s written so well and it comes so naturally: the pain and the anguish, they're so deep-rooted inside of me now. I feel like when I put that mask on, I transform.

The old movie stars like Humphrey Bogart, James Cagney, James Stewart, they weren't this gorgeous, striking six-foot man who's rippled with muscles. They just really had a character in their face and they drank and they smoked and I love that shit. These were the real actors. They really lived, and you could see the lines on their faces, the lines of the years that they lived. You just believed them. I loved that.

What is the relationship of Jack Huston?

Jack Huston began going out with the American model, Shannan Click, in 2011 and they have been in a relationship ever since. The couple has two children- daughter Sage Lavina Huston, born on April 6, 2013, and son Cypress Night Huston, born in January 2016.

Who is Jack Huston?

Jack is an English actor. Also, he had a supporting role in the 2013 film American Hustle and played the eponymous Ben-Hur in the 2016 historical drama.

Jack Huston was born in King’s Lynn, Norfolk, England, the United Kingdom on December 7, 1982. His birth name is Jack Alexander Huston and he is currently 40 years old. His father’s name is Tony Huston (actor, writer, and screen director) and his mother’s name is Margot Lavinia Cholmondeley.

Talking about his profession, Jack’s first shot on television came in 2004 when he portrayed the role of Flavius in the TV series ‘Spartacus’ on the USA network. The chance to work on the big screen came soon afterward. In the year 2006, he played an important part in the film ‘Factory Girl. The movie was a biopic of Edie Sedgwick, an American model, and Jack portrayed the role of poet Gerard Malanga in it.

Jack Huston returned to the small screen with BBC/Masterpiece’s Miss Austen Regrets in 2008 and Eastwick in 2009. However, the role that left a mark came in 2010 in HBO’s Broadway Empire, where he played a physically and emotionally disfigured survivor of the First World War who became a hired gun after returning. His role became a recurring one in the series he appeared in five episodes of the first season. Many believe that this is the best work he has done on screen.

The following year saw Huston playing a part in Al Pacino’s directorial venture Wild Salome. Many other movies came his way, which included Not Fade Away, Two Jacks, which was an adaptation of a novel of the same name by Leo Tolstoy, and Night Train to Lisbon. In the year 2013, he was a part of David O. Russell’s American Hustle, an FBI flick also starring Amy Adams, Christian Bale, and Bradley Cooper.

In the following year, he returned to the stage at London’s Gielgud Theatre when he essayed the role of Charles Bruno in Strangers on a Train. Besides that, he also did a modeling gig, also featuring his dog, for GAP.

Whereas, from 2014 to 2016, he was a part of movies like Posthumous, The Longest Ride, Hail, Ceaser! and Their Finest. He also played the title character in the remake of the 1959 classic Ben-Hur.  These include Militia, Berlin, I Love You, An Actor Prepares, and Above Suspicion.

He won Best Ensemble for American Hustle (2013) at COFCA Award, and he won Rising Star of the Year at CinemaCon Award. Likewise, he won Outstanding Performance by an Ensemble in a Drama Series for Boardwalk Empire (2010) at Screen Actors Guild Awards.

He has an estimated net worth of around $5 million (as per 2022 data) and he has earned that sum of money from his professional career.

There was a rumor about Jack Huston as Dent In The Batman. Currently, he is far from rumors and controversies.

Jack Huston has a height of 6 feet. Additionally, he weighs 69Kg. In addition, his chest, waist, and biceps sizes are 41-32-15 inches respectively. Jack’s hair color is black and his eye color is green.

Also, read the affair, salary, the net worth, controversy, and the bio of Mark Gatiss, Tom Sturridge, Cameron Bright