Jack Schlossberg is currently single and is not dating anyone.

He is focusing on his future plans.

Previously, Jack dated Krissy Jones. Everything went smoothly for the couple when they first started dating in 2017.

However, their romance ended after two years.

Aside from that, Jack was rumored to be dating Cazzie David.

However, no other relationship has been officially confirmed. So far, there is no information on Jack’s current dating life.

Jack made his relationship with Krissy Jones public, but following their breakup, he never made another romance public. 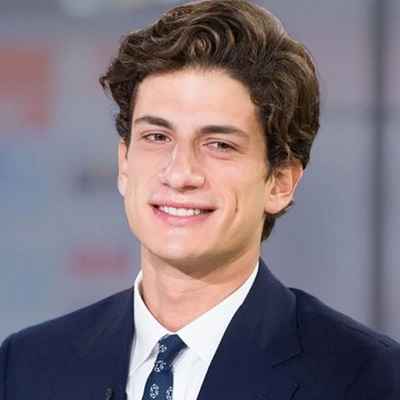 Who is Jack Schlossberg?

Jack Schlossberg is an American Lawyer. Also, he is well known for being the youngest child of Caroline Kennedy and the grandson of late President John F Kennedy.

Talking about his nationality, he identifies as an American.

He has two older sisters named Rose and Tatiana. His father comes from an Orthodox Jewish family, while his mother has Iris, French, Scottish, and English descent.

Getting into his educational background, he graduated from Yale University with a degree in history, focusing on Japanese history.

Schlossberg began working for Rakuten, Inc, a Japanese online and e-commerce firm, in Tokyo, Japan, in October 2015, after graduating from Yale. While accompanying Caroline on duty in Sendai, he met Hiroshi Mikitani, the CEO of Rakuten.

Jack worked for Suntory Holdings Limited, a Japanese brewing, distilling, and beverage corporation, and the US Department of State in 2016.

Schlossberg introduced President Barack Obama at the Medal of Freedom Award Dinner in November 2013, which marked the 50th anniversary of his grandfather’s death.

He and Caroline traveled to Fukushima Prefecture in Japan in May 2014.

In November 2017, he presented Congressman Carlos Curbelo (R-Fla.) and May Boeve, executive director of 350.org, with the New Frontier Award.

On May 11, 2018, Schlossberg made his acting debut in the eighth season finale of Blue Bloods as Officer Jack Hammer.

Schlossberg has an estimated net worth of $ 20 million, while he hasn’t shared anything regarding his income, earnings, and salary.

He makes a good and comfortable living from his earnings.

Schlossberg has not been a part of any controversy yet.

She has managed to keep a clean image to the public as of now and appears to be avoiding unwanted scandals and rumors.

Jack stands tall at a height of 6 feet and weighs approx 75kgs.

Moreover, he has handsome looks with a pair of black eyes.

He has light brownish colored hair.

He has 86.9k followers on Instagram under the username @jackuno.

Similarly, he has over 44k followers under the username @jbkschlossberg.