Jackee Harry is a divorced woman. She married two times in her life to date. At first, she is married to arranger and conductor Jerry Jemmott in the year 1980.

However, their marriage didn’t work out, and got divorced in the year 1984.  Afterward, Jackee linked up with the famous Beverly Hills hairstylist Elgin Charles. He is bisexual. On December 1, 1996, the couple tied the knot during a posh Beverly Hills ceremony in California, and weeding took place at the prestigious Beverly Hills Hotel.

A year after, the couple adopted 8 months old child named Frank. As of now, he is an aspiring professional boxer.  However, their marriage split up after seven years of togetherness. In 2003, the couple got divorced. Even after the duo got divorced, they still hold a close relationship with each other.

Besides, she has been in a relationship with Blair Underwood and Ray J (2012). As of now, she has confessed in many interviews that she uses dating apps and still looking for a man. 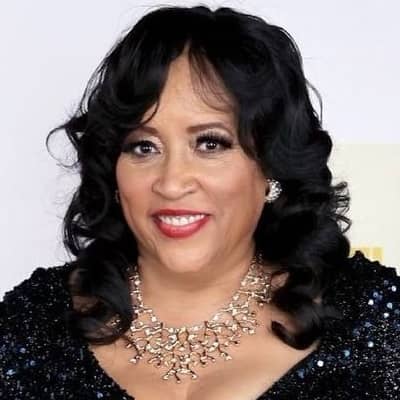 Who is Jackee Harry?

Jackee Harry is an American renowned actress, singer, comedian, and director. She is best known for her prominent role as Sandra Clark on the NBC TV series 227 (1985-90) and as Lisa Landry on the ABC/The EB sitcom, Sister, Sister (1994-99).

Harry is the first and only African-American actress to win an Emmy Award for  Outstanding Supporting Actress in a Comedy Series in the year 1987.

Jackee was born on the 14th of August, 1956, as Jacqueline Yvonne Harry. The birthplace of Harry is in Winston-Salem, North Carolina, U.S. but raised in Harlem, New York.

The name of her parents is Flossie Harry (mother) and Warren Harry (father). Also, she has two siblings named Brenda Free-Man and Miles Harry. Talking about her nationality, she holds American citizenship and belongs to Trinidadian descent.

Jackee attended the High School of the Performing Arts in Midtown Manhattan in New York City. Later, she enrolled in the Long Island University and received a Bachelor of Arts in education.

Afterward, she started her career as a History teacher at Brooklyn Technical High School and left after two years to pursue an acting career. Then, she studied acting at the Henry Street Settlement on the Lower East Side, New York City.

Jackee began her acting career as a stage artist and made her Broadway debut in the year 1978 in William F. Brown’s A Broadway Musical as Melinda Bernard. Throughout the 1980s she starred in numerous stage productions including played a nurse in the ‘Billie Holiday Theatre’ in the production of ‘Going Through Changes’/’Two Plays by Ricard Wesley. Similarly, she appeared as ‘Melinda Bernard‘ in ‘A Broadway Musical’ staged at the LuntFontanne Theatre.

She starred as Billie Holiday in the 1994 play, Lady Day at Emerson’s Bar and Grill, through the musical stage she earned much attention in the public. Furthermore, she appeared in stage productions of The Sunshine Boya, A Christmas Carol, and Damn Yankees. Also, she toured nationally in J.D. Lawrence’s The Clean Up Woman along with Telma Hopkins, Christoper Williams, and Fred Hammond.

Harry made her television debut in the year 1983 as the main character of Lily Mason on the NBC soap opera, Another World. She continued the character until the year 1986. In 1984, she appeared on the big screen in an uncredited role in Paul Mazurskt’s romantic comedy-drama film, Moscow on the Hudson.

Furthermore, Jackee is a spokesperson for the Thurgood Marshall Scholarship Fund and a Global Ambassador to the Women’s International Center.

To date, Harry hasn’t been part of any sorts of rumors and disputes that create a huge headline in the media. Also, she stays miles away from such controversial acts that could hamper her personal and professional life.

The Emmy Award actress has an estimated net worth of $6.5 million as of 2022. However, her salary, annual income, and real estate are still under review.

The actress stands at the height of 5 feet 7 inches tall and her weight is about 54 kg. She has brown hair color and a brown pair of eyes as well. Further, there is not much information available regarding her other body measurements.

Similarly, she has a self-titled YouTube channel with over 3.74k subscribers.