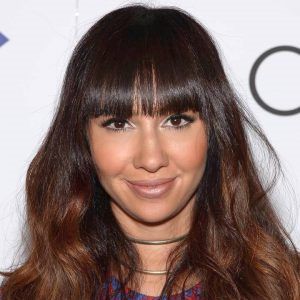 I would concentrate on my acting right now because it’s working for me, and I would like to do Latino characters. I would like to represent my culture and show what we can do. I love my country, I love my people, I love to dance, I love my food, I’m more Dominican than American

I love Kourtney, she’s always — when we worked together she was a sweetheart.

What is the relationship of Jackie Cruz?

Jackie Cruz is bisexual and has once captured the limelight when her steamy kissing scenes with Kourtney Kardashian was leaked in the media. This has happened at a club during an episode of Kourtney & Khloe Take Miami in 2009.

At present, Jackie is dating an actor and artist Fernando Garcia and is considered to be the cutest couple. Jackie continually posts pictures of them on her Instagram. The couple has regularly been seen making public appearances and he has even appeared in Jackie’s cover song on YouTube.

Who is Jackie Cruz?

Jackie Cruz is an actress, singer and former model. She is known for her role as Marisol “Flaca” Gonzales on the Netflix original series Orange Is The New Black.

She was born in Queens, New York City, the United States on August 8, 1986, and she is currently 35 years old. Later, she moved to Los Angeles and then to the Santiago Dominican Republic with her mother. Cruz started living alone when she was at the age of 16. On the following year, she has had a car accident due to which she suffered a collapsed lung and was in a coma. She had to undergo brain surgery.

There is no information about her siblings. Regarding parents, her family is from the Dominican Republic. Jackie speaks fluently in English and Spanish. She holds Dominican- American citizenship and Dominican ethnicity. Her birth sign is Leo.

In which school did Jackie Cruz attend?

Talking about Jackie’s education history, she attended Alexander Hamilton High School in Los Angeles, where she was a member of the school’s music academy.

Talking about her profession, at the beginning of her career, beautiful and multi-talented, Jackie worked with female singer group called Krush Velvet along with renown American scholar, William James Adam a.k.a Will.I.am.

A year before that, she appeared on the E! television series, Kourtney and Khloe Take Miami. Eventually, she also worked with a renown American personality, Kourtney Kardashian.

Likewise, Jackie Cruz began to gain exposure after she was cast as Flaca in the series, Orange Is The New Black in 2013. Moreover, she also portrayed her role along with other actors including Jason Biggs, Michelle Hurst, Laura Prepon, and Taylor Schilling. Since then, she has been working on it.

Cruz was working as a model as well as a waitress at New York City restaurant Lavo before she was cast as Marisol “Flaca” Gonzales on the Netflix series Orange.

Cruz has not revealed her salary yet. About her net worth, it is estimated at around $1 million as of 2022

Is Jackie Cruz involved in any rumors and controversies?

The 32 years old actress has maintained her celebrity status and has not harmed any other person in her career. Currently, she is far from rumors and controversies.

Also, read the affair, salary, the net worth, controversy, and the bio of Laura Prepon, Rosa Acosta, Aimee Carrero