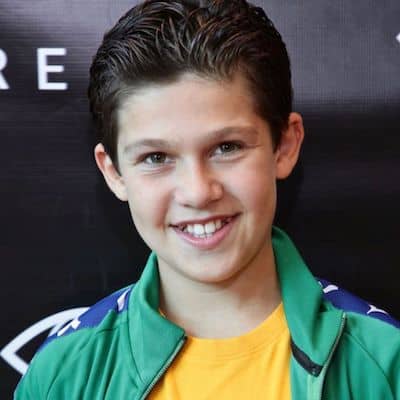 Jackson Dollinger’s relationship status is possibly single. He has not revealed the details of his girlfriend or affair.

He loves to eat sushi ad KitKat chocolate. He is also fond of watching Tom and Jerry.

Who is Jackson Dollinger?

Jackson Dollinger is an American actor and singer. He is mostly known for his character in the Loosely Exactly Nicole (2016), Sydney to the Max (2019), and Jimmy Kimmel Live! (2003).

He is associated with the Mad Scout Entertainment label.

He was born on 19 Jan 2007 in Los Angeles, California, United States, the United States. His mother and his father’s name is not revealed to the public.

But on 2020’s Father Day, he posted a picture with his dad on social media. Jackson’s ethnic background is Caucasian and is the only child of his parents.

Talking about academics, he has not shared the details.

Jackson Dollinger’s first appeared on screen with Hollywood Today Live in 2016. He was also seen in Jimmy Kimmel Live! in 2017 and Loosely Exactly Nicole in 2018.

But his popularity is associated with a show titled Sydney to the Max. It is a comedy series and he played the role of young Max from 2019 till 2021. He was also seen as Charlie for two episodes in Puppy Dog Pals.

Besides acting, he is also an amazing singer. His debut single came out in June 2020 titled I’m Yours. His EP Social Isolation was released in 2021.

He has earned a net worth of $100 thousand (estimated) at present. The average salary received by him is unknown.

This actor/singer is keeping himself away from rumors and also not surrounded by any desperate scandals.

Regarding Jackson Dollinger’s body features his height is 4 ft 5 inches and his body weight is 45 kg. In addition, he has hazel-colored eyes plus his hair is dark brown.

Moreover, his accounts on Facebook and Twitter are followed by more than 9k and 1.3k followers respectively.

He is also on TikTok with more than 49k fans and his YouTube channel has gained over 4.51k subscribers.