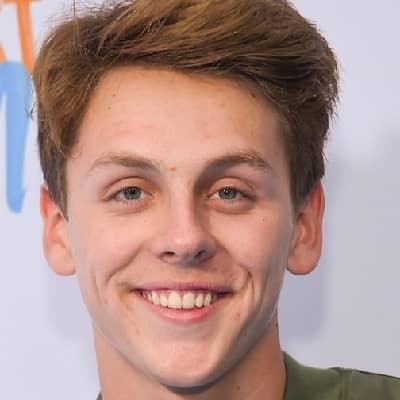 Jacob Bertrand is currently in a relationship with Serena Pullen. Serena is from California and the pair have dated since July 2017.

On May 6, 2019, Jacob wished a birthday to his girlfriend through his Instagram account. Also, the couple often uploads pictures of them on their social media handles.

Moreover, no information available regarding his past relationship or girlfriends.

Who is Jacob Bertrand?

Jacob Bertrand is an American Actor. He is better known for his role Jack Malloy in the Disney Channel Original “The Swap” and for his lead role in the Disney XD series “Kirby Bucket”.

The actor was born on March 6, 2000, in Los Angeles, California, United States. As of 2021, he is 21 years old. He holds an American nationality and belongs to the mixed ethnicity of French and Hispanic. His Zodiac sign is Pisces.

Jacob is interested in sports from his young age and used to play for his high school soccer team.

Jacob attended Claremont High School. Besides, no information available regarding his other educational background.

In 2009, Jacob made his professional debut as a child actor, Thomas Wilkins in the film Duress. Similarly, He features in various television series as a guest star like The Cape, The Middle, and Little in common in 2011.

In 2014, Jacob’s made a notable appearance in the lead role of Kirby Buckets that aired on Disney XD from October 20, 2014, to February 2, 2017. Likewise, he appeared in the character Jack Malloy in The Swap which was premiered in 2016.

Besides an actor, he also voiced the character of Gil on the Nickelodeon animated series Bubble Guppies’. The most famous character he has voiced till now is in the role  of Monty from the Disney movie ‘Rise of the Guardians.’

Similarly, he was a part of a charity fundraising event for cancer patients in May 2015 where events ticket money went into the charity fund.

Until now, he is not surrounded by any kind of rumored and scandal that creates a huge buzz in the media and hamper his career and personal life.

The film and television actor estimated net worth is $2 million. Besides, he earns $12 thousand per episode of series or movies.

The actor is 5 feet 8 inches tall approximately and his weight is around 70 kg. Similarly, he has black hair color and his eyes color is blue.

Jacob is active on Instagram with the account @thejaconnertrand where he has over 726k followers. Likewise, he joined Twitter in July 2013 with the handle @jb_mixmatch where he has more than 27.3k followers.

Moreover, he also active in Tiktok where he has more than 282.9k followers.