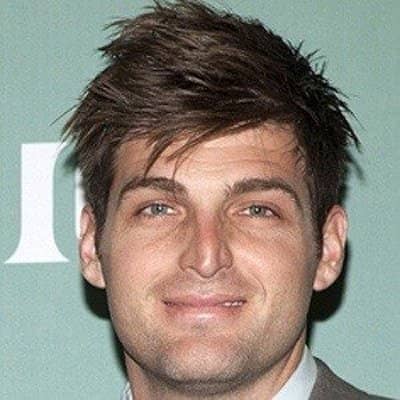 Jacob Fink is currently in a married relationship. He proposed Rebecca St. James on 25 Dec 2010 and they exchanged vows on 23 April 2011. His wife is a popular singer and songwriter.

Their wedding took place in the Junípero Serra Museum, California and they are blessed with three children. They welcomed their first daughter named Gemma Elena Fink in Feb 2014.

Then in May 2018, their second kid was born named Imogen Watson Fink. Rebecca announced her third pregnncy in April 2020.

After four months, she gave birth to her son, River Jack.

Who is Jacob Fink?

Jacob Fink aka Cubbie Fink is an American musical artist. He is known for being the bassist and backup vocalist for a band, Foster the People.

Moreover, he also served South Africa as a missionary. There he helped people with sports programs, teaching life skills and AIDS awareness.

He was born on 04 Oct 1983 in Colorado, United States. The name of his father and his mother is unknown to the public.

Jacob’s ancestry is Caucasian and about his academics, he passed out from La Costa Canyon High School. Then he enrolled at Vanguard University to study communication.

Jacob Fink is mostly popular for his musical talents. He used to be a part of an indie-pop band named Foster the People. They became hit after the release of their track Pumped Up Kicks which is loved by the listeners.

This band was formed by Mark Foster along with Mark Pontiffs in 2009. Jacob joined then in the same year as a bassist and vocalist (backup).

Their first album Torches was released in 2011 and in the same year, their EP titled Foster the People also came. After three years, this musical group gave their fans another album titled Supermodel.

But Jacob wanted to pursue other opportunities, so he left the band. He announced the separation news via Facebook in 2015. In addition, he was also seen in Tv shows like the Last Call with Carson Daly, The Tonight Show, Jimmy Kimmel Live!, and The Late Late Show with Craig Ferguson.

At present, this actor has accumulated an estimated net worth of around $100 thousand. His salary/earnings from his career are unknown.

His life partner, Rebecca has assets of around $1 million.

Jacob is keeping himself away from rumors plus scandals at present.

Regarding Jacob Fink’s body features, his height and his body weight are average. He has grey eyes and dark brown hair with a medium skin complexion.