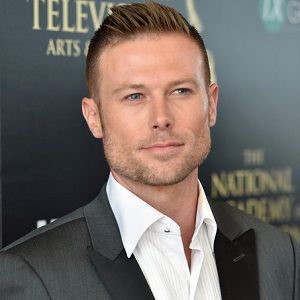 Jacob Young is a married man as he married his long term girlfriend Christen Steward. She is a model by profession. They got engaged in April 2006. Similarly, they married on 13th May 2007. Their marriage ceremony was held on Westmount Country Club in Woodland Park, New Jersey.

They are a happy couple and have three children. The name of their children is Luke Wayne Young (2008), Molly Lynn Young (2013), and Grace Elizabeth Young (2016). Similarly, there is no sign of disputes and extra-marital affairs.

Who is Jacob Young?

Jacob Young is an American actor and singer. He is famous the role of JR Chandler on the ABC daytime soap opera All My Children and Rick Forrester on CBS’s The Bold and the Beautiful.

Jacob Wayne Young was born on 10th September 1979 in Renton, Washington, U.S. He was the son of Rhonda and Michael Young, Sr. Similarly, he was raised in Loveland, Colorado. Likewise, he moved to San Diego, California at the age of seventeen with his mother. Similarly, his parents divorced and his mother remarried to Edward Vasquez.

Likewise, he has one brother and two sisters. His nationality is American, whereas his ethnicity is unknown.

The famous actor Jacob Young played the role of Rick Forrester on the CBS soap The Bold and the Beautiful from December 31, 1997, to September 15, 1999. He portrayed Lucky Spencer on General Hospital for three years from February 25, 2000, until February 10, 2003. In the year 2001, he was named as Sexiest Soap Star by People magazine.

Similarly, Jacob Young portrayed JR Chandler on All My Children from October 1, 2003, to September 23, 2011. In the year 2011, he repeated his role as Rick on The Bold and the Beautiful. Likewise, his first appearance was on September 26. On the year 2001, Artemis Records released his self-titled CD.

Moreover, he guest-starred in the film The Girl Next Door. Further, he again guest-starred on ABC’s Hope & Faith and, from May 2006 through August 20, 2006. Also, he starred in Disney’s Beauty and the Beast on Broadway, in the role of Lumiere.

Jacob Young earns a huge amount of money from his career. He hasn’t revealed his salary and other incomes. However, his estimated net worth is more than $3 million.

Jacob Young has not been into any rumors and controversy as he keeps his life private.

Talking about Jacob Young’s body measurements, he has a height of 5 feet 10 inches and 75kg. Similarly, he has brown color hair and blue eyes. Further, there is no information about his body measurements and body size.