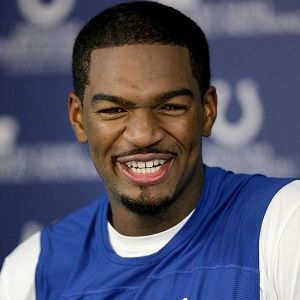 Jacoby is in a relationship with Sloan Young. They met in 2013, in Florida since then they started dating. Sloan works in an NGO in CryOut! in Seattle. Jacoby calls his girlfriend his daily inspiration.

Jacoby and Sloan are living happily.

Who is Jacoby Brissett?

Jacoby Brissett is an American football player and plays as a football quarterback for the Indianapolis Colts of the National Football League (NFL). Previously, he has played for New England Patriots for one season in 2016.

Jacoby was born on December 11, 1993, in West Palm Beach, Florida, the United States to All-American ancestry.

From the beginning of his childhood, he had a keen interest in football and he began to play at a very early age. Concerning his early life, there is not any information regarding it.

Moving towards his education, he joined William T. Dwyer High School in Palm Beach Gardens, Florida. Later, he played college football at the University of Florida in February 2011.

Jacoby Brissett began his career as a quarterback at the University of Florida. As a professional football player, he got selected for New England Patriots in the third round with the 91st overall pick in the 2016 NFL Draft and signed a four-year rookie contract.

Furthermore, he made his debut on September 18, 2016, against the Miami Dolphin. In his first career start against the Houston Texans, Jacoby has completed 11-of-19 passes for 103 yards.

On September 2, 2017, he signed with the Indianapolis Colts. In the game against Arizona Cardinals, he threw for a career-high 216 yards and got the Colts out to a 10–0 lead.

So far, Jacoby has not any awards and achievements in his career. As a young player, he has been doing his best. In the near future, he will definitely grab some awards.

Being a successful footballer, he earns $580,038 as a salary. His net worth is estimated to be $2 Million.

Moving towards his body measurements, Jacoby Brissett has a towering height of 6 feet 4 inches and weighs 107 kg. Additionally, he has black hair and black eyes.