Musician Jacoby Shaddix is married to his high school sweetheart and is a father of three. 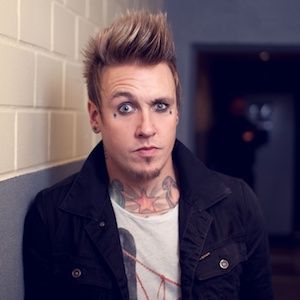 Who was the fool, who the wise man, beggar or king? Whether poor or rich, all's the same in death: I'm not looking for sympathy, just understanding

This is my dream. I ain't giving up.

Jacoby Shaddix is a married man. He married his high school crush Kelly Shaddix on July 19, 1997. He lives with his wife in El Dorado Hills, California.

Who is Jacoby Shaddix?

Shaddix was the host for the MTV show Scarred that aired from April 10 to September 18, 2007. He hosted the show for the entire two seasons and all 20 episodes. The name of the show was derived from one of Papa Roach’s songs Scars. He ultimately left the show due to touring demands with Papa Roach.

He is presently busy on a musical tour with Papa Roach. The tour started on May 5 and ends on August 26, 2018, across The US and Europe.

He has two brothers Bryson and Trevor. Shaddix lived his childhood in scarcity. He has been caught stating in an interview that in the first year of his life he and his family were literally homeless. He attended Vacaville High School, California.

Also, he was interested in music since his early childhood. He also shares a passion for football and has played for Vacaville High School.

Shaddix attended Vacaville High School, California. No accurate date has been known about his graduation and college and university information.

Shaddix has worked as a dishwasher and janitor before he became the founder member and lead vocalists of Papa Roach, an alternative rock band that was formed in 1993.

His song Last Resort is one of the band’s most enjoyed songs and rock fans continue to enjoy the song to date. The band has more than a dozen albums released to date since its establishment.

In 2003 he performed as the lead singer for the band Fight the Sky. The band was intended to serve as a side-project of Shaddix where he could display the heavier sides of his vocals.

Although the band has recorded its debut album Seven Deadly Songs in 2004, no public updates have been made regarding the band or its album.

Shaddix’s band Papa Roach has been nominated for the MTV Video Music Awards for Best New Artist for the band’s song Last Resort.

The band has also been nominated for the Grammy Awards for the Best New Artist(2001) and also for the Best Music video, Short Form(2001).

Jacoby Shaddix has a net worth of $12 million. Details regarding his salary are unknown.

Jacoby often has got himself into trouble for openly expressing his opinions about American Politics among his fans and others.

His rebellious outfits and don’t give a damn attitude are loved and praised by rock fans while others choose to differ.

The provocative lyrics of his songs and his hoarse voice are loved by many while many have an equal distaste and rates his creation explicit.

Jacoby Shaddix is a white American and is 5 feet 10 inches tall and weighs 7okg. The color of his hair is black. He has green eyes and an average body build.