The Washington Post journalist Jacqueline Alemany is low-key about her romantic life.

Jacqueline Alemany is not married. Similarly, she is possibly single at the moment.

She is known for her career but she has kept her love life private.

There is no information about her previous affairs and boyfriend.

She is busy focusing on her professional career than relationships.

Alemany shared a photo of a guy on Instagram on December 29, 2021, with a sweet message wishing him a happy birthday. 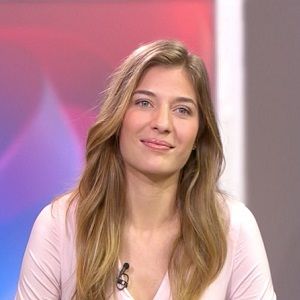 Who is Jacqueline Alemany?

Jacqueline Alemany is an American Journalist and political reporter.

She is currently working as a reporter and early-morning newsletter anchor with The Washington Post.

Similarly, she is known for her coverage of policy issues including the national opioid crisis.

She was born on 24th February 1989 in Scarsdale, New York, United States.

Her current age is 33 years. Her parents are Ellen (nee Luciani) and Joaquin Jack Alemany.

Also, her father is the son of Catalan immigrants from Spain.

Likewise, her nationality is American but her ethnicity is Caucasian.

Talking about her education, she graduated from Harvard University in 2011, with a degree in government.

Similarly, She was the Harvard Crimson women’s basketball team captain in her senior year.

She started her career as a journalist. She used to write blogs on the ‘HerCampus.com’ website when she was in college.

Later she joined CBS Corporation in the year 2012 and worked with CBS news.

While she was there she became a Broadcast Associate for Face of the Nation from November 2012 to May 2015.

Similarly, Jacqueline Alemany went ahead to become a chef of Executive Assistant to the Bureaus until November 2016.

Likewise, she covered the 2016 presidential campaign as a digital reporter for CBS News.

Similarly, she worked as the Digital Associate Producer of ’60 Minutes’ an award-winning show on CBS news for two months.

She landed as a reporter at Vogue and the Huffington Post.

Furthermore, she is currently working as a White House reporter since January 2017 covering Donald Trump’s administration.

Furthermore, she reported from Tanzania on the topic of climate change and drone technology in Zanzibar.

She was named a congressional correspondent in 2021.

She was named anchor and contributor to The Early 202, The Washington Post’s morning newsletter, in September 2021.

She was awarded an International Women’s Media Foundation fellowship in the year 2017.

Similarly, she has not revealed her net worth and salary.

But she might earn a huge amount of money from her career.

Similarly, according to sources, it is known that the average salary of a journalist is about $40,000 per year.

Furthermore, she has an estimated net worth of around $1.3 million as of 2022. Her primary source of income is journalism.

There are no rumors and controversy about Jacqueline Alemany.

Jacqueline Alemany has a height of 5 feet 11 inches but her weight is unknown.

Similarly, she has blonde hair and blue eyes color.

Jacqueline Alemany is active on social media. She has around 9974 followers with 999 Following under the user name on Instagram.

You may also like to read about education, early life, career, affairs, body stat, and social media of Anne Thompson (Journalist), Maria Stephanos, and Matthew Continetti