Updated On November 24, 2022 | Published By: Claude Payton
Share this
Married 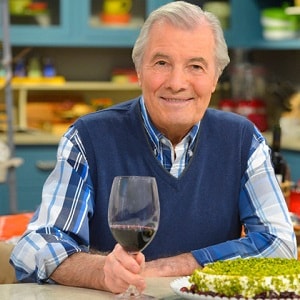 What is the relationship of Jacques Pepin?

Jacques Pepin has been married to Gloria Pepin in 1966. They are sharing their happiness from about a half-century. They have given birth to a daughter and she is named as Claudine Pepin. Claudine is also a chef and she has written a book named ‘Kids Cook French’. Gloria is also often seen in television shows and programs.

There is no list of affair related to him. He is seen with his wife in many social programs and events. He is very active in social activities as well and he contributes with some donations to many social acts.

Who is Jacques Pepin?

Jacques Pepin is an author, chef and television personality and he is globally recognized as a French chef. Jacques Pepin has written numerous cookbooks including, More Fast Food My Way, The Apprentice: My Life in the Kitchen, etc. and he has appeared on American and French television.

What are the birth facts of Jacques Pepin?

His parents used to run a restaurant called Le Pelican. He was raised along with his two siblings in France. He is the second child of his parents. He holds French citizenship but his ethnicity is European.

He quit his school life at the age of 13 to learn cooking. He attended Columbia University and completed his master’s degree in French in 1972. He is a doctorate from Boston University with an honorary Doctor of Humane Letters degree on May 22, 2011.

He used to work in his parent’s restaurant and he decided to get training at the Plaza Athenee under Lucien Diat after he discovered his love for food. He served for 2 years in the military until 1958. Then he moved to the USA and he began working in a restaurant called Le Pavillon.

Pepin was offered to develop food for Howard Johnson’s restaurant with alongside Pierre Franey in 1961. He became successful after he launched his book La Technique and he began featuring in many television shows. He appeared in the series named ‘Julia and Jacques Cooking at Home’ in 1999. Pepin was cast in the television show ‘Essential Pepin’ from 2011 to 2012.

He once suffered from a minor stroke in 2015 but it was recovered at a nearby hospital. He has now become one of the renowned and famous chefs across the world.

He was awarded Daytime Emmy in 2001 for his appearance in the series ‘Julia and Jacques Cooking at Home. Along with that, he was also awarded L’Ordre des Arts et des Letters in 1997, Chevalier de L’Ordre du Merite Agricole in 1992 and many more.

Moreover, he has also won an Emmy Award for a series with an American chef, author, and television personality, Julia Child.

How much is the net worth of Jacques Pepin?

It is estimated that he has a net worth of around $20 million and his main source of income is his professional career.

He has not been involved in any rumors or controversy due to his secretive type of nature. He does not want to open himself in front of others.

He has hazel eyes and a salt and pepper hair color. His height is unknown and weighs 75 kg. Other information regarding his body measurement is under review.