Renowned as Celia of The TV movie, Descendants 3 and Natasha of Mann and Wife. 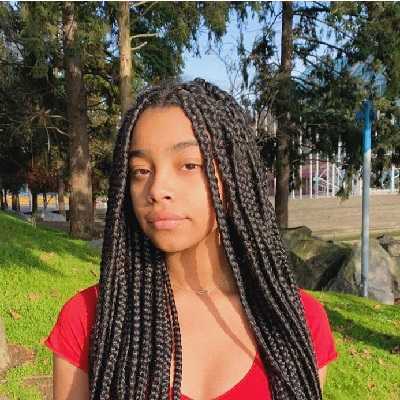 If you want it,you work for it.

Jadah Marie’s current relationship status is possibly single. There is no information about dating.

The rising actress is focus on her acting career.

Who is Jadah Marie?

American Jadah Marie is a three-times cheer title winner actress. Marie is renowned as Celia of The TV movie, Descendants 3 and Natasha of Mann and Wife.

Next, she will be appearing in the TV series Julie and the Phantoms as Flynn and Home Invasion as Jamie.

Jadah Marie was born Jadah Marie Johnson on the 2nd of June 2005 in Fontana, CA. Her father, Christian Redd is also an actor. He is of British-French ancestry.

She is the youngest among her nine siblings that include two identical brothers, Amir and Amari O’Neil.

Amari is also a TV actor by profession.

Jadah is a Gymnast

The actress is also a gymnast. At the tender age of four, she was involved in gymnastics and cheerleading. She is the three times winner of the title cheer as a flyer.

Her father, Redd inspired her to be an actress. She loves his work in Jesus Walk.

Inspired by her dad, she first debuted on TV with the series, Mann and Wife. In the comedy-based drama, she portrayed the character of Natasha Mann who happens to the younger daughter of the lead character, Toni Mann. She continued portraying the character till 2017.

In between, she also featured the TV series as Ashley Reed. However, Ashley was only a one-time character in the series.

Her career as an actress took a major turn when she was cast in the TV movie, Descendants 3. In the musical adventure drama, she appeared as Celia Facilier, daughter of Dr. Facilier. Celia is a fortune teller on the Isle of the Lost.

She is a black-eyed brunette. Her height is 5 feet and 2 inches.

The rising actress has been through any sort of controversy that creates a buzz on media.

She is also active on YouTube with a self-titled YouTube channel. The Channel 1.73k subscribers with 12.9k views.