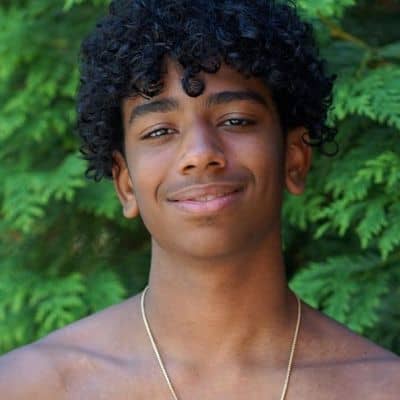 Who is the celebrity kid dating?

Currently, his relationship status is single. Jaden Amarrio doesn’t seem to date anyone at the moment.

He remains low-key when it comes to his private life. Also, he has not disclosed any information about his past affairs.

Jaden Amarrio is an American celebrity son. He is famously known for being the son of an American model, businesswoman, socialite, and actress, La Reina Shaw.

The celebrity son was born on February 18, 2006, in the United States. As of 2022, Jaden Amarrio is 16 years old. He maintains American nationality and belongs to mixed ethnicity.

He was born to his mother, La Reina Shaw who is a well-known American model, Instagram personality, businesswoman, social media influencer, actress, and entrepreneur from Baku, Azerbaijan.

The actual name of his father is unknown but the sources stated that he is a football player.

Similarly, he has a half-brother named, Caesar Lorenzo Newton from his mother’s marriage with Cam Newton. Newton is an American football quarterback for the Carolina Panthers of the National Football League (NFL).

Further info his educational life is still under review.

Looking at his Instagram account, the young guy seems to be a rugby player from UFC knights. But the info is yet to be confirmed.

Moreover, Jaden Ammario is famous for being the son of his celebrity mother.

The enthusiastic lady who wants to do something on her own founded her own swimwear company at the age of 25. The business earned her success and she decides to her hand in other ventures too.

Being a body fitness conscious, she has worked with the bodybuilder Dexter “The Blade” Jackson and his company, Team Blade. Then, the team-up led her to work with an Australian supplement company too.

While working with Team Blade, she created a fitness and training website as well as tips for the fans. Then, she founded the fitness apparel company, Reign.

However, it is not confirmed either her business is running or not at the moment.

Apart from business, La Reina Shaw is an actress too. She has been cast in movies like Chocolate City, Queen of the Universe, Criminal, and others.

After her appearance in these movies, she gained recognition and fame. The actress has also been featured in the music video, Money on My Mind by Sam Smith.

She even received the title of Miss Ajerbaizan in the Queen of the Universe Pageant which happened in Los Angeles, California.

Moreover, Shaw is an Instagram as well fitness model who has worked for EHOPLabas, Doritos, Western Digital, and other brands.

What is Jaden Amarrio’s net worth?

His mother, La Reina Shaw has an estimated net worth that ranges between 8 million USD. Nonetheless, her salary and incomes are still under review.

The young star, Jaden Amarrio stands at a good height and average weight. At the moment, his physique measurements are not available.

Adding up more, he has a brown complexion along with a pair of black eyes and hair of the same color too.

Jaden Amarrio is present on Instagram under the username, @jaden.amarrio. His Instagram has garnered more than 3.8K followers.

Recently on March 25, 2022, he posted a picture along with Boogie. Amurrio was wearing a rugby sports dress in the photo.