This rose several questions about Smith’s sexuality. At present, he is believed to be single. 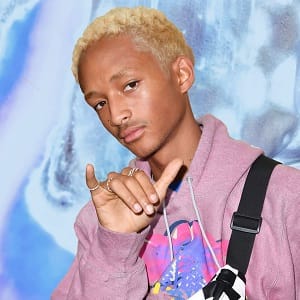 I used to not be really honest with girls and then I dropped a song called 'Starry Room' and then I started turning over a new leaf.

My dad once told me, he was like, 'The only time you should lie is when someone's holding a gun to your head and says 'Okay, lie or I'm going to shoot you.'' And that really stuck with me.

I'll watch movies I like to see, Steve Jobs interviews, something that's going to make me smart and then go to sleep.

If Kendall Jenner doesn't enjoy one of my songs it doesn't come out.

Anything you see in any magazine ever is fake.

Who is Jaden Smith?

Jaden Smith is an American singer, rapper, songwriter, and actor. People mostly know him as the son of actors Jada Pinkett Smith and Will Smith.

To date, he has appeared in several movies and television series including ‘Skate Kitchen’, ‘The Get Down’, and ‘After Earth’ among others.

Smith was born as Jaden Christopher Syre Smith in Malibu, California on July 8, 1998. He was born to parents Jada Pinkett Smith and Will Smith who are both actors.

Additionally, he has an older half-brother, Trey Smith, and a younger sister, Willow Smith. Since both of his parents are of acting backgrounds, it comes as no surprise that Jaden became interested in the world of acting during his childhood years. He is of American nationality.

Talking about his education, Smith attended the New Village Leadership Academy. Later, he was homeschooled by his parents.

Jaden Smith initially appeared in several short videos like ‘Will Smith: Just the Two of Us’ and ‘Will Smith: Black Suits Comin’ (Nod Ya Head).’ Additionally, he also appeared as Reggie in the TV series ‘All of Us .’ His first major role was in the 2006 film ‘The Pursuit of Happyness.’

He appeared as Christopher in the movie. In 2008, Jaden had a role in the TV series ‘The Suite Life of Zack and Cody.’ Since then, he has appeared in several other movies and television series. At present, he has more than 15 credits as an actor.

Some other movies and television series that Smith has appeared in are ‘Neo Yokio’, ‘The Get Down’, ‘Brothers in Atlanta’, ‘The Karate Kid’, and ‘The Day the Earth Stood Still’ among others. Apart from his acting career, Smith is also a recognized rapper. He released his mixtape, ‘The Cool Cafe’ on October 1, 2012.

In addition, he released his debut album titled ‘Syre’ on November 17, 2017. Furthermore, he also started his own clothing/lifestyle brand called MSFTSrep. In 2018, he created a denim line with the fashion brand G-Star.

Smith won the Saturn Award in 2009 for his appearance in ‘The Day the Earth Stood Still.’ Additionally, he has also garnered several BET Award nominations. In 2011, he received the Black Reel Award nomination.

Smith has not revealed his current salary. However, he has an estimated net worth of around $8 million at present.

Smith has been part of several controversies in his career. He is a vivid conspiracy theorist and has often released numerous controversial statements.

He became part of a controversy in 2013 after he criticized traditional education and advised people to drop out of school.

Furthermore, several of Jaden’s comments about the Illuminati, Chemtrails, and extraterrestrial life have often been criticized. At present, there are no rumors concerning Smith and his career.

Talking about his body measurement, Jaden Smith has a height of 5 feet 6 inches. Additionally, he weighs around 65 kg or 143 lbs. Furthermore, his hair color and eye color are dark browns.

In addition, he has over 17M followers on Instagram. Similarly, his Facebook page has more than 10M followers.