Jaeden Lieberher is a child actor from America. He is currently single.

Who is Jaeden Lieberher dating?

Jaeden Lieberher might be currently single but has had past affairs.

He has been in relationships with American dancer Lilia Buckingham (2018) and American actress Sophia Lillis. 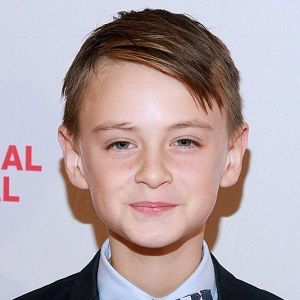 Who is Jaeden Lieberher?

Jaeden Lieberher is a child actor from America. He is popular for his roles in St. Vincent, Midnight Special, The Confirmation, and Aloha.

Furthermore, he has also appeared as Bill Denbrough in the horror film It in 2017 and in season three of Masters of Sex.

Jaeden Lieberher was born on January 4, 2003, in Philadelphia, Pennsylvania, United States. His birth name is Jaeden Wesley Lieberher. His ethnicity is Mixed(German, English, Korean, French Canadian, and Belgian or Walloon) and his nationality is American.

He is the son of an executive chef Wes Lieberher(father) and Angela Martell(mother). He has a sister, Jovi Lieberher and he does not have any brothers.

At the age of eight, he moved to Los Angeles along with his mother. From an early age, he had a keen interest in acting and he also appeared in a few commercials as well. Talking about his education, there is not any information regarding it.

Jaeden began his acting career after moving to Los Angeles. At the age of early age of nine, he began starring in a couple of commercials. In the following year, he made his professional debut and landed the role of a young Chris Evans in “Playing it Cool”.

In 2014, Jaeden was featured in the big hit movie St. Vincent along with some familiar names, Bill Murray, Melissa McCarthy, and Naomi Watts.

Moreover, he starred opposite Bradley Cooper, Rachel McAdams, and Emma Stone in the 2015 movie Aloha. Additionally, the talented actor has also appeared as a boy with special powers who is on the run with his father in the 2016 movie Midnight Special.

Additionally, the talented actor has also appeared as a boy with special powers who is on the run with his father in the 2016 movie Midnight Special. In 2017, Jaeden was cast in a leading role for the 2017 horror film It.

Currently, he is working on the movie The True Adventures of Wolfboy which will release in 2018. Besides this, he has also acted in a couple of TV shows, American Dad and Masters of Sex.

Being a reputed actor at such young age, Jaeden earns a decent amount of money from his profession. However, his net worth is $1 million as of 2022, and his salary is unknown.

Rumors are that he is having an affair with Lilia Buckingham, actress and dancer. However, they did not confirm the relationship Moreover, he has never stuck on the topic of controversy to date.

Young and cute, Jaeden has a height of 5 feet 5 inches and his weight is 57 kg. Furthermore, he has beautiful green eyes and blonde hair.