Jai Brooks is a social media personality. He came to the limelight after he and Ariana Grande were seen together. They were in a relationship but broke up after Ariana cheated on Jai. 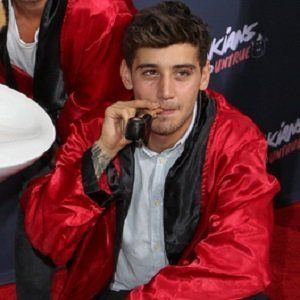 Jai Brooks’ is in a relationship with Allegra Rotella.

Previously, he was in a relationship with Ariana Grande. Ariana is a very successful and talented singer/songwriter. The couple first started dating in 2012. They met each other through Twitter. The official confirmation of their relationship was their post on Twitter on October 7, 2012.

After that, they met for the first time on December 20, 2012, in New York City. They stayed together until August 2013. And then they broke up. But in 2014, they were back together for a short period of time. Unfortunately, once they separated. Jai Brooks has accused Arian of cheating on him.

Who is Jai Brooks?

Australia-born Jai Brooks is an eminent YouTube personality. The Social media superstar holds Australian and Italian citizenship. Additionally, he is also a singer.

He released several songs with his group, “The Janoskians.” Notably, he is famous for posting prank, challenger, and other fun videos on YouTube.

Jai Brooks was born in Melbourne in Australia as Jaidon Domenic-Matthew Brooks to Swedish ancestry. The date of his birth is May 3, 1995.

His mother’s name is Gina Brooks. He grew up with his twin brother, Luke Brooks during his childhood. Similarly, he also has an elder brother, Beau Brooks.

Discussing his education, he went to some elementary and middle schools in Melbourne. Afterward, he joined high school. Later, he dropped out to pursue a career on YouTube.

Jai Brooks is a massive social media star. He is a famous YouTuber. He started posting videos on YouTube since September 27, 2011. The channel features all kinds of fun videos. They posts pranks, stunts, music, and other stuff. Some of his favorite videos are “The Talk Dirty Dance,” “Public Disturbance,” “Knock and Don’t Run,” and others.

Presently, he is part of multiple YouTube channels. The channel, “The Janoskians” (also their group name) consists of him and three other guys. It has more than 2.5 million subscribers and more than 252 million views as of now.

Similarly, his other channel, “TwinTalkTime” is run by him and his twin brother, Luke Brooks. This channel has more than 478k subscribers and more than 17 million views.

Jai started his career on YouTube in 2011. And since then he has been part of many prank, challenge, and fun videos. Apart from his fun stuff, he also sings. He is a singer and a songwriter.

Since the signing contract with Sony Music in 2012, his group “Janoskians” has released many songs. In 2015, they released their EP, “Would U Love Me.” Some of their hit songs are “Real Girls Eat Cake,” “Set this World on Fire,” and “Would U Love Me.”

His salary and net worth are not available. The net value of “The Janoskians” is estimated at around $5 million.

Jai Brooks became part of a controversy when he slammed Selena Gomez on Instagram. The reply from Jai Brooks pointed Selena’s post about the DACA program to be just a celebrity show-off. Recently, he is not part of any significant controversy or rumors.

Jai Brooks has an athletic and fit body. He has a height of around 5 feet 8 inches. While his eye color is hazel, his hair is of dark brown color. According to some websites, his body weight is approximately 72kg.

Jai is an internet celebrity. Subsequently, he has a massive amount of fan following in social media.