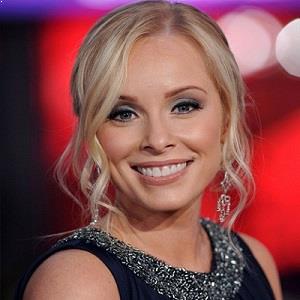 We're too busy busting whorehouses or solving murders. That's what makes the show so funny.

What is the relationship of Jaime Bergman?

Jaime Bergman is a married woman. She married actor David Boreanaz on November 24, 2001.

The pair has a son, Jaden (Jaden Rayne Boreanaz, born on May 1, 2002, and a daughter, Bella born Bardot Vita Boreanaz on August 31, 2009, from their marriage. Bella’s name was later changed to Bella Vita Bardot Boreanaz.

Who is Jaime Bergman?

Jaime Bergman is an American model and actress. She was the Playboy Magazine’s Playmate of the Month in January 1999. Additionally, she has also appeared in numerous Playboy videos.

She was always interested in the world of glamour and show business since her childhood years. She is of American nationality. Furthermore, she belongs to a mixed ethnic background of English, 1/8 Swedish, and possibly others.

In which school did Jaime Bergman attend?

Talking about his education, Bergman graduated from West Jordon High School in Utah in 1993. She was a high school cheerleader.

Bergman was the St. Pauli Girl for 1999, the first of the Playmate national spokesmodels for the beer brand. Additionally, she has also worked as a Prudential real estate agent.

From 2000 to 2002, she played the character of ‘B. J. Cummings’ in the Howard Stern Baywatch spoof, ‘Son of the Beach’. Furthermore, in July 2000, she appeared on the cover of Playboy and in a new nude pictorial inside to promote the show.

Bergman has also appeared in big-time feature films and television series like ‘Daybreak’, ‘Any Given Sunday’, ‘Bones’, ‘Screwball: The Ted Whitfield Story’, ‘Boa vs. Python, ‘It’s All Relative’, ‘Knee High P.I.’, ‘Dawson’s Creek’, ‘Soulkeeper’ and ‘Gone in Sixty Seconds’ among others.

All in all, she has more than 20 credits as an actress. Furthermore, she also appeared in a TV commercial for Dr. Pepper in 2000. In 2013, Jaime, David, and their friends Melissa and Aaron Ravo started a nail polish line called Chrome Girl.

What is Jaime Bergman’s net worth?

Bergman has not revealed her current salary. However, she has an estimated net worth of around $ 1 million at present.

Jaime became part of a controversy after her husband David admitted to being unfaithful to his wife of 10 years, Bergman, with an unspecified woman. At present, there are no rumors concerning her life and career.

Bergman is active on social media. She has several followers on the social networking site Twitter. She has more than 24k followers on Twitter. In addition, she also has her official Instagram and Facebook accounts.

Also get to know more about the birth facts, education, career, net worth, rumors, height, and social media of different personalities like Sandrine Holt, Candace Moon, and Andrea Espada.