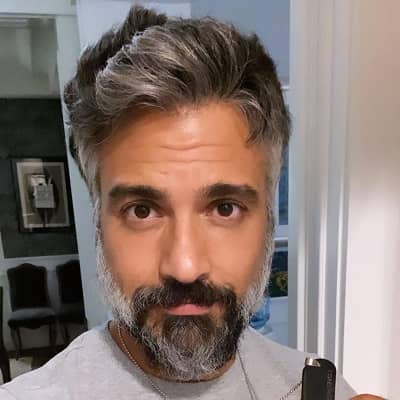 Jaime Camil is having a happy conjugal life. He is married to Heidi Balvanera who is a model. The couple started dating in the year 2004. After dating for over 8 years the couple ultimately decided to tie the knot on November 9, 2012.

Together the duo is blessed with two children a daughter named Elena Camil (b. 2011) and a son named Jaime Camil III.

Who is Jaime Camil?

Jaime Camil is a Mexican renowned actor, singer, producer, and television personality. He is widely recognized for his prominent role as Fernando Mendiola in La Fea Mas Bella and Rogelio de la Vega in Jane the virgin.

Presently, he is filming the upcoming series Schmigadoon featuring the main role of Doc Lopez.

Jaime was born on the 22nd of July 1973 as Jaime Federico Said Camil Saldaña da Gama. He hails from Mexico City.

The name of his parents are Jaime Camil Garza and Cecilia Saldanha da Gama. His father is a businessman by profession with partial Egyptian heritage. Similarly, his mother is a Brazilian singer.

Talking about his academic background, he received a bachelor’s degree in business administration from Universidad Anahuac. Similarly, he trained acting in New York, Los Angeles, Mexico, and Italy in classical opera.

He holds dual nationality in Brazil and Mexico and belongs to mixed ethnicity (Mexican and Brazilian).

In 1993, Jaime started his career as a radio commentator on Radioactive 98.5. He made his television debut in 1995 as a host in the EI show de Jaime Camil. After then, he continued as a host in various television shows such as TV Azteca’s Qué nochecita con Jaime Camil (1996), Televisa’s Iperacion triunfo (2002), Aventura por México alongside Javier Poza (2009), and El Gran Show (2010).

In 1997, he appeared in Mirada de mujer as Antonio Ramírez for 225 episode. He starred in a recurring role of Roberto Flores in 1999 Mexican telenovela, Por tu amor. The same year, he released his first album Para estar contigo, which took him to major cities in Mexico, South America, and the United States. In 2002, he released his second album titled Una vez más. His singles are Dime (#17 in Billboard’s charts) and Muriendo por ti rose (#24 Billboard’s charts).

In 2004, he made his big-screen debut through the film Puños rosas where he portrayed the role of Randy Garza. That year, he also appeared in another film Zapata as Eufemio Zapata. He has also given his voice in several films like Open Season (2006), Barry B. Benson (2007).  Camil is the co-producer of the 2012 film Chiapas, el corazón del café.

Jaime has managed to maintain a clean profile to date. He hasn’t been surrounded by rumors and controversy the could hamper his personal and professional life.

As of 2021, Jaime has accumulated an estimated net worth of around $15 million through his successful acting and singing career. His estimated salary is around $445,200 as an actor. Additionally, he has endorsed various brands such as Ford F-150, Play Osmo, Yoobi, Canelo, Polished for men, and more.

The actor has an athletic body physique with an impressive height. He stands at the height of 6 feet 2 inches tall and weighs about 85 kg. He has a dark brown pair of eyes with salt and pepper hair color.

The actor is quite active on social media sites. He has verified Instagram, Twitter, and Facebook accounts with over 3.7m followers, 4.1m followers, and 3.5m followers respectively.

Likely, he has verified the Tiktok account with more than 1.4m followers. He has also a self-titled YouTube channel with nearly 144k subscribers.