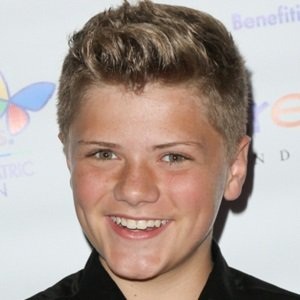 What is the relationship of Jake Brennan?

Cute and handsome Jake is so young and is an unmarried boy. Also, he is not associated with divorce case yet.

He has managed to keep his personal information so secret that nothing relating his past and present affair status is published.

Being so young, it seems like he is sharpening his strength and skills to make his all dreams come true. According to our record, he is perhaps single.

Who is Jake Brennan?

Jake Brennan is an American actor. He is extremely prominent for his role in “Sam and Cat”, “I Didn’t Do it”, Marvel’s Agents of S.H.I.E.L.D., CBS’ and “Criminal Minds”. He has made a recognizable position in the American acting field at a young age.

Jake was born to American parents on October 30, 2002, in Bellflower, CA, U.S.A. His nationality is American and belongs to the North American ethnicity.

There is no more information published about his parents and siblings; however, we extracted that he was raised up by his parents in a friendly and in entertaining environment along with his sister named Cassie, who is also currently an actress.

Also, he was raised up by his parents to secure his career in the acting field and he was also highly interested and dedicated. He learned acting by caricaturing and portraying a different characters in films and T.V shows.

There is no information published about Jake’s educational status.

Jake began his acting career working in theater productions of The Lion King, Seussical Jr., Mulan, and Joseph, and the Amazing Technicolor Dreamcoat. He has also made his guest appearance in several T.V (shows and series) including I Didn’t Do It, Agents of S.H.I.E.L.D., Sam & Cat, etc.

He has also starred in the Netflix series Richie Rich. Also, he has made an appearance in  MattyB’s music video “The Good Life.” He hasn’t won any awards so far in his career; however, he is working hard to make stand himself on the front line.

Jake Brennan: Salary and Net Worth

There is no information about his salary and as of 2022, he has an estimated net worth of $1 million.

Currently, there are no drastic rumors regarding Jake’s personal and professional life. It seems like he is doing his best job without harming others for which he hasn’t been a part of desperate controversy yet. Also, he is so young to be a part of rumors and controversy.


Jake has a height of 5 feet 6 inches. His hair color is blond and his eye color is green. Currently, his body weight is not known.