Jake Epstein is a well-recognized Canadian actor, singer, and writer. He is married to Vanessa Smythe.

Talking about his relationship details, Jake Epstein is happily living a married life with Vanessa Smythe who is also an actress and writer. The couple tied the knot on 7 July 2018 with the involvement of close relatives and family.

They live happily without any sign of complication. Other than that, Jake has not shared his relationship details with the public till now. 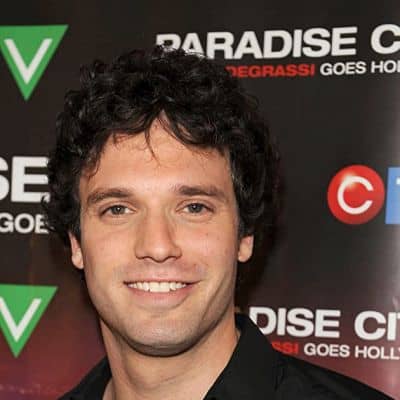 Who is Jake Epstein?

Jake Epstein is a well-recognized Canadian actor, singer, and writer. Epstein is widely famed for his role in Degrassi: The Next Generation and Designated Survivor.

Moreover, he performed on Broadway as Peter Parker in Spider-Man: Turn Off the Dark, Gerry Goffin in “Beautiful: The Carole King Musical”, and starred in the US National Tours of Green Day’s American Idiot and Spring Awakening.

Jake Epstein was born on 16 January 1987. At present, he is 34 years young star. Likewise, his birthplace is Toronto, Ontario, Canada.

Jake is the son of his father, Ian Epstein whereas his mother is Kathy Kacer. Moreover, he has an elder sister named Gabi Epstein.

Talking about his nationality, Epstein holds a Canadian identity whereas his ethnicity is Ashkenazi Jewish.

Regarding education, the actor attended Claude Watson School for the Arts and later completed his graduation from the National Theatre School of Canada.

Jake began his professional stage debut in a Soulpepper Theatre Company production of Out Town at the Royal Alexandra Theatre. He then featured in the role of Artful Dodger in Mirvish Productions’ stage production of Oliver! The star then appeared on the TV show The Zack Files, he played Craig Manning on Degrassi: The Next Generation.

However, Epstein left the show, Degrassi during the fifth season to attend the National Theatre School of Canada. In 2009, the actor featured as CB (Charlie Brown) in Dog Sees God: Confessions of a Teenage Blockhead. After two years, Jake portrayed the role of Billy’s older brother in a Toronto production of Billy Elliot the Musical.

Jake has recently worked on his original one-act autobiographical show Boy Falls From the Sky: Jake Epstein Live at Supermarket at the 2019 Toronto Fringe Festival. He then performed on Broadway with the title referring to his time performing in Spider-Man: Turn Off the Dark.

Some of his remarkable roles in the series are Brian in Suits, Gerry Goffin in Beautiful: The Carole King Musical, and Chuck in Designated Survivor.

A Famed Canadian star, Epstein has earned a handsome amount of money from his profession. He has been active in his profession from the year 1999 till the present.

It is reported that Jake Epstein has an estimated net worth of $3 million as of 2022.

Jake has never been part of any controversial matter or rumors till now. The star has been preoccupied with his professional and personal life.

It seems that Epstein prefers enjoying his personal life and does not want to merge it with his professional life.

34 years star has handsome looks and an admirable personality. He stands at a height of 6feet 2inches. Also, he has a balanced body weight of 80 kg.

Furthermore, Epstein has brown eyes whereas his hair is black.

Regarding his social media presence, Jake Epstein is an active personality on social media. Jake has more than 122k followers on his official Instagram account @officialjakeepstein.