He plays in safety position for the Los Angeles Rams of the National Football League.

Who is Jake Gervase Married to?

Jake Gervase is a married man. He is married to Hailey Schneider.

The couple first met in 1st grade at St. Pauls Assumption High School. They also studied at the same university. Hailey is an elementary teacher who teaches in a school. 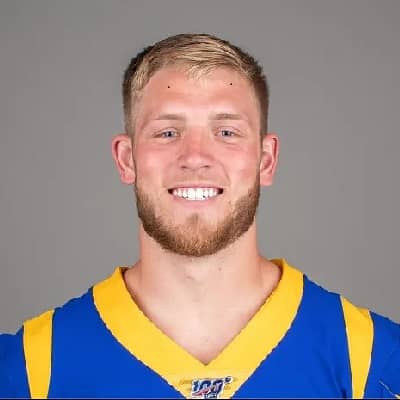 Who is Jake Gervase?

Jake Gervase is an American football player. He plays in safety position for the Los Angeles Rams of the National Football League.

His parents are Sheila Gervase and Steve Gervase. He is a single child and doesn’t have any other siblings.

The player is of the same American ethnicity and nationality.

Jake attended Assumption High School in Davenport, Iowa. And then he completed his education at The University of Iowa. He has a major in Finance.

The 26 yrs player used to play football from his college time. Jake played as a member of the Iowa Hawkeyes for five seasons. Jake joined the team as a walk-on and redshirting his true freshman season.

Likewise, he completed his collegiate career with 153 total tackles and seven interceptions in 44 games played. Jake signs with the Los Angeles Rams as an undrafted free agent on May 14, 2019.

Gervase signed a reserve/futures contract with the Los Angeles Rams followingly on January 25, 2021. Then he was re-signed to the Rams’ practice squad the following day. That was the time he made his NFL debut. Gervase was waived by the Rams on August 31, 2021.

The player was signed to the active roster on January 12, 2022. Jake has even won Super Bowl LVI when the Rams defeated the Cincinnati Bengals.

Jake has a $2 million value of total assets. The player signed one year $780,000 contract with the Los Angeles Rams.

His career earning is as below:

Jake has always been focused on his career. He doesn’t get involved in any activities that cause controversy. Likewise, the player also stays out of rumors.

The player stands with a height of 6 feet and 1 inch. And his body mass is around 96 kg.

He has blonde hair with beautiful grey eyes.

You may also read the bio of other players like Madison Chock, Darrell Henderson Jr., Chris Garrett, and Glenn Maxwell.