Jake Harris is a fisherman featured in Deadliest Catch of Discovery Channel. 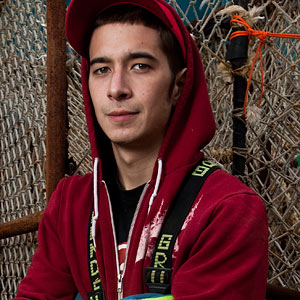 Who is Jake Harris?

Jake Harris is an American commercial fisherman and reality television star. He gained a lot of popularity and recognition during his time, in reality, show Deadliest Catch airing on Discovery Channel.

He was born on Oct 23, 1985, in Seattle, Washington, United States, as Jacob Charles Harris. He has a Caucasian ethnicity.

His late father was also a fisherman, Phil Harris and his mother’s name is Mary Harris. He grew up alongside his brother Josh Harris.

Unfortunately, there is no sufficient information regarding his education and qualifications except the fact that he started his career while he was in high school.

Jake Harris started his career as-as a crew member of the fishing vessel called Cornelia Marie. While the filming of the show, Deadliest catch, he was stealing the pills from his father.

Later on, he confronted his father and admitted to him about his addiction. Since then, he worked tirelessly to maintain a good image.

Unfortunately, his father took his last breath on Feb 9, 2010, suffering a pulmonary embolism. It happened when he was offloading crabs from the vessel. Later on, an episode, Captain’s death, was filmed entirely dedicated to him on July 20, 2010.

After the death of his father, he and his brother separated working for different boats. Later on, they were able to purchase the Cornelia Marie where his father had worked as a captain.

Moreover, he along with his brother published a book, Captain Phil Harris: The Legendary Crab Fisherman, Our Hero, Our Dad. In 2012, he left the show.

This TV star’s net worth is estimated at around $100 thousand.

His late father also had founded a coffee company named as the Captain’s Reserve.

During his lifetime, he suffered from drug addiction since his college days. As a result, he went to jail for the possession of Xanax and crystal meth in April 2017.

At the same time, he stole the car under the influence of a drug. Moreover, he was arrested numerous times for drug possession.

On 1 Aug 2019, he was sentenced for 18 months of imprisonment. He was charged with driving under the influence and possession with intent to manufacture or distribute heroin.

Jake Harris has a height of 5 feet 9 inches and his weight is average.

His hair color is black and his eyes color is in dark brown.