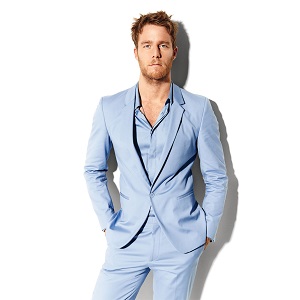 I grew up with both cats and dogs. I love dogs. But I'd want a big dog, and I'd like to have a yard before I get one

I would love to be in New York, but it's really hard to be unemployed in New York. Everyone's got a place to be. In L.A., there's a system, a science to being unemployed

'Manhattan Love Story' has a very special place in my heart for many reasons. We were very sad to see it go. It brought me to New York, and there's nothing better than getting to go to work and fall for Analeigh Tipton every day.

What is the relationship of Jake McDorman?

Jake is in a relationship with actress, Analeigh Tipton. The lovebirds started dating since September of 2014. Till now, they are living happily enjoying each other’s company. And there is no sign of separation yet.

There is no other information regarding his past relationship or love affairs.

Who is Jake McDorman?

Jake McDorman is of American nationality. The talented Jake is an actor. Furthermore, he is also a famous TV personality. He is active in the acting field since 1999.

Jake featured in an Oscar-nominated film, “American Sniper”. Presently, he is a prominent figure in the media for starring in the CBS drama series, “Limitless”. He played the lead character of Brian Finch. Additionally, he is famous for starring in the comedy-drama, “Shameless”.

Jake was born in the Harlem area in New York City in the state of New York. He was born to his parents, Jake Deborah Gale and John Allen McDorman III on July 8, 1986.

His nationality is American and his ethnicity is mixed(English, Irish, German and French).

His birth name is John Allen “Jake” McDorman IV. He was born the eldest child of his parents. He grew up in his home state. There is no other detail about his early life.

He studied acting at the Dallas Young Actors Studio. As per his education, he attended Northwood Hills Elementary in Texas. Afterward, he enrolled at Richardson High School for his further studies. Later he graduated from there. Previously, he also went to Westwood Junior High.

Jake made his debut on TV in the series, “Run of the House” in 2003. He portrayed the role of Scott Banks in two episodes of the series. The next year in 2004, he featured the regular character in the TV series, “Quintuplets”. He got major popularity on TV in 2007. He featured in the comedy-drama TV series, “Greek” in 74 episodes of the series. This raised his fame. Afterward, he played a lead role in TV series like “Are You There, Chelsea?”, “Limitless”, “Shameless”, and “Manhattan Love Story”.

Contrary to TV, he made his debut in films in 2005. In 2005, he appeared in a film, “Echoes of Innocence”. He played the character of Dave in the film. Later on, he kept on working hard. Consequently, he featured in huge films like, “Live Free or Die Hard”, and “American Sniper”.

Jake McDorman: Salary and Net Worth

His good performance has paid him off with a pretty good salary. Eventually, he has made an estimated net worth of around $3 million as of 2022.

Jake is a man who likes to focus on his career. He is a very productive person. Likewise, he avoids trash-talking in the media. This keeps him away from any media controversies. Therefore, as of now, there are no rumors or criticism regarding his work life.

Jake stands tall at a height of 6 feet. Similarly, he has a healthy body with a suitable weight and body figure. But unfortunately, such information is not available yet. He has a blue eye color and brown hair color.