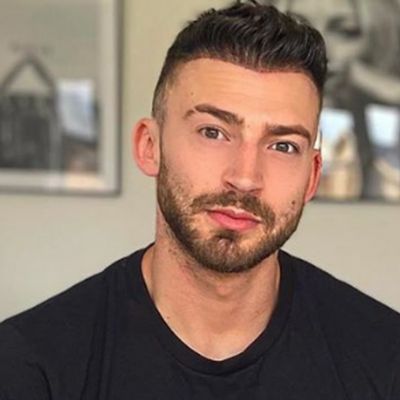 Who is Jake Quickenden's Wife?

Recently on 4 September 2022, Jake and Sophie exchanged their nuptials in a stunning Ibiza wedding.

The duo started dating in 2018 and shared an engagement ring on August 2021. Before, getting married the couple had their son named, Leo, who was born in April 2021.

Moreover, he is the stepfather to a stepson, Freddie Quickenden, from Sophie’s past relationship.

Previously, The former X-Factor star, 34 was engaged to a lady named, Danielle Fogarty, who has maintained a low-key profile.

There is no further info about their relationship.

Who is Jake Quickenden?

Jacob “Jake” Quickenden is a well-known English singer, footballer, and reality television personality. In 2012 and 2014, he appeared as a contestant on the ninth and eleventh series of, ‘The X Factor, (UK).’

He was also a contestant in the 14th series of I’m a Celebrity…Get Me Out of Here!, where he ended up being a runner-up.

The talented star Jake was born on September 3, 1988, in Scunthorpe, England. As of 2022, he is 34 years old holding an American nationality.

Likewise, he belongs to the Caucasian ethnicity while his birth sign is Virgo as per the astrological chart.

The footballer has not revealed about his parents, siblings, and early educational life.

Was Jake Quickenden a Footballer?

In the initial Jake, made his career debut as a youth player for Scunthorpe United. Unfortunately, he broke his leg, and could not continue the game.

After he fully recovered, he played in Australia professionally for two years. Then, he re-shifted to England and participated in the Evostik Northern Premier League, Premier Division, where he played for Frickley Athletic.

In the 9th series of The X Factor‘s audition, he sang, ‘Use Somebody‘, which got him selected. Then, he sang, How to Save a Life, along with fellow contenders, Adam Burridge and Robbie Hance.

Later, he was dumped out of the show, after Scherzinger decided not to put Jake.

However, his passion for singing took him in the audition for the 12th series, of The X Factor. For the audition, Quickenden sang, ‘All of Me”,  in the beginning, but, he was stopped in the mid and he performed another song, ‘Say Something.’ His audition performance gained good comments and was directly put to Bootcamp.

Unfortunately, he was eliminated in week 3 of the show on 27 October 2014, losing over, Only the Young.

On 20 November 2014, he appeared as a contestant in the 14th series of I’m a Celebrity…Get Me Out of Here! Luckily, he ended the show as runner-up over Carl ‘Foggy’ Fogarty.

Following that, in 2018, he joined the tenth series of Dancing on Ice. In the show, professional German Skater, Vanessa Bauer was chosen as his partner.  Luckily, along with his partner, Jake ended the show as the winner to Brooke Vincent and Max Evans.

Apart from these, he is a social media influencer as well.

Coming on to his earnings, Jake Quickenden has an estimated net worth of around $1 million. Primarily, he makes money through his singing career.

Additionally, he makes decent money from his contract and dealings with several businesses.

Has Jake Quickenden Been Par Of Rumors And Controversy?

To date, the Dancing on Ice Season 10’s winner, Jake has not been part of any desperate rumors. As he prefers to keep himself out of the limelight and social media drama, he has maintained himself out of controversies.

Talking about the star’s body measurements, Jake Quickenden stands at the height of 6 feet 1 inch whereas he weighs around 80 Kg.

Moreover, his physical appearance includes brown hair and eyes of the same color too.

As Jake loves inking his body, he has various tattoos on his hand, belly, and right upper quadrant.

On top of that, his TikTok account,@jakequickenden, is followed by almost 409.1K followers.

Along with that, Quickenden also has a self-titled YouTube channel, which is enriched with over 62.1K subscribers.

Sophie Church, girlfriend of Jake Quickenden is pregnant with their first child!

Unseen Photos from the Love Island’s Marcel Somerville Wedding! Why only few Islanders showed up?