Talking about the relationship status of Jake Tapper, he is married to Jennifer Marie Brown. The couple got into a married relationship in the year 2006.

They were blessed with two children. His son Jack was born in 2009. He doesn’t seem to have any extramarital affairs and rumors about the separation of their married life. The couple is living a happy married life with their children. 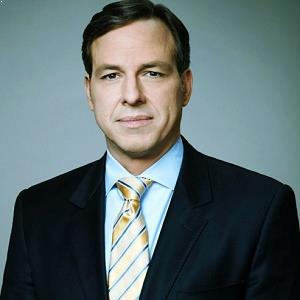 The President's top aide just told the New York Times that the press should "keep its mouth shut". No.

Mr. President, you won the Presidency, you won it legitimately, now get to work and stop whining the number of votes you got.

we've been here before: this is not a land with much "sense", or respect for facts, this is about a place with conspiracy theories untethered to facts and these theories are voiced by President Trump: Barack Obama faked his birth certificate because he was born in Africa: false, thousands of New Jersey Muslims were on TV celebrating 911: false, Ted Cruz's father had something to do with Lee Harvey Oswald: false, vaccines cause autism: false, there's something "fishy" about the deaths of Justice Scalia, or Vince Foster: all false, inaugural crowd sizes, three to five million of illegal votes, it goes on and on, none of it is true.

Who is Jake Tapper?

He is best known for his work on CNN and the ABC networks. He is also commonly known for his book ‘The Outpost: Untold Story of American Valor’.

Born as Jacob Paul Tapper in New York City and raised in the Queen Village neighborhood of Philadelphia. He is the son of a Theodore S., a professor of pediatrics at Jefferson Medical College.

He is of mixed(Ashkenazi Jewish, Ulster-Scots/Northern Irish, Scottish, English, German, French) ethnicity and has an American nationality.

Tapper began his full-time journalism career for Washington City Paper as a Senior Writer in 1998.

Before that, he has already served as a Campaign Press Secretary for Democratic congressional candidate Marjorie Margolies-Mezvinsky and later served as her congressional press secretary.

For his work at Washington City Paper, he has won a Society of Professional Journalists award. He was the Washington Correspondent for Salon.com and he started hosting the CNN news talk show ‘Take Five’ in 2001. In 2003, he joined ABC News covering a wide range of topics including hurricane Katrina.

In January 2013, he began hosting his program ‘The Lead with Jake Tapper’ which won three National Headliner Awards for its reporting in 2013. In June 2015, he became the host of CNN’s Sunday political show ‘State of the Union with Jake Tapper’.

Besides television personality, he is also a writer who has also been a columnist for Talk Magazine and has written for numerous publications.

He has also written books like ‘The Outpost: An Untold Story of American Valor’ and ‘Down and Dirty: The Plot to Steal the Presidency.

Likewise, he has also contributed cartoons to the American Spectator magazine, Los Angeles Times, and The Philadelphia Inquirer. His drawings were even auctioned online to raise money for the Homes for Our Troops Foundation.

Moreover, his success in his career path has paid him well financially. His net worth varies depending on the source so for now, we can say that his net worth is growing significantly.

Jake Tapper suffered a controversy for his analysis in the press conference with Donald Trump.

He has a height of 5 feet and 7 inches. He weighs 68 kg and has brown hair and eyes. His shoe size is not available.