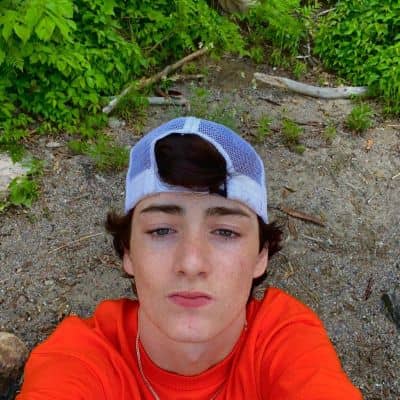 Jakob Greer is possibly single. He has introduced anyone as his girlfriend or lover.

Who is Jakob Greer?

Jakob Greer is a Canadian content creator and social media influencer. He is best known for posting short-form videos on his Tiktok account named @greerzy.

Jakob is a very secretive person when it comes to his personal life. He hasn’t disclosed his parent identity in the media. He has a sister named Jordyn Greer.

Also, his academic background is under the curtains. Greer holds Canadian nationality and he belongs to Caucasian ethnicity.

In early 2018, Jakob created an Instagram account and started posting selfies on his account. He then joined the popular social media site, Tiktok under the username @greerzy where he has more than 4.1m followers to date.

He often posts lip-sync and POV videos on the platform. His first viral video on Tiktok was captioned, “Only cares about the bike”.

Similarly, her other most-likes videos on Tiktok are ‘Eyes Won’t Open’, ‘When you regret saying not to McDonald’s cause you’re mad’, ‘The old switcharoo’, ‘Soppy Wins The Game, Soppy Soppy’, ‘Always that one kid who’d rather do work than watch a movie, and more. He has collaborated with a number of Tik Tok stars such as Heyitsmaggieuh, Ryan Wauters, and Jake Bensulock.

Further, he has also a self-titled YouTube channel where he has more than 48.2k subscribers. To date, he has uploaded 44 videos on his channel.

Jakob is a rising star who stays miles away from such controversial acts that create a huge buzz in the media.

The TikTok star hasn’t revealed his net worth, salary, and other earnings in the media. His income is still under review.

Jakob stands at the height of 5 feet 4 inches tall and his weight is about 60 kg. Likewise, he has a blue pair of eyes and light brown hair color.

Besides Tiktok and YouTube, Jakob is active on Instagram with more than 63k followers. He is active on Snapchat under the username @jakob_greer. Further, he is active on OnlyFans.

He has shared his email id [email protected] for any business inquiries.